Galleries Videos CONTACT ADVERTISE
Famagusta 32°
clear sky
BUSINESS EDUCATION ENTERTAINMENT HEALTH POLITICS SCIENCE SPORTS TECHNOLOGY
12:08 Guide To Online Sports Betting: How To Choose A Sportsbook
08:28 What Are Some Reasons to Consult a Brain Injury Lawyer?
09:24 Blockchain Solutions for Enterprises: How To Increase Efficiency And Profitability
07:06 How To Deal With A Car Crash In New York
17:43 Tips to keep in mind while choosing the casino site
11:34 Relation Between Employee Theft and Pre-employment Screening Check
04:37 Search your own desired site to play sports for betting
18:00 Top 3 Career Path Options for Business Analysts Preview
15:35 The history of Imen Jane, who is the influencer and the charges on the...
18:48 Sebastian Vettel's Greatest Races
BIST
1124
GOLD
474.541
USD
7.8264
GPB
10.1081
EUR
9.1400
Breaking News
Top 3 Career Path Options for Business Analysts Preview
Close

CHICAGO - Nikola Jokic had already signed Serbian flags, doled out high-fives and flashed a wide grin to the portion of the United Center crowd that had come to celebrate him.As he finally trotted to the locker room after the Nuggets' 125-107 victory over... 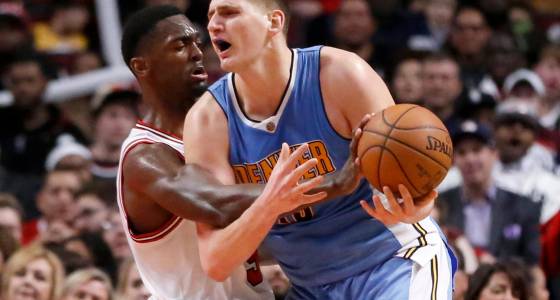 CHICAGO - Nikola Jokic had already signed Serbian flags, doled out high-fives and flashed a wide grin to the portion of the United Center crowd that had come to celebrate him.

As he finally trotted to the locker room after the Nuggets' 125-107 victory over the Chicago Bulls, he was stopped in the tunnel once more.

"Nikola, can I get a picture?" a young fan wearing Jokic's No. 15 jersey asked.

The Nuggets prized young center obliged, of course. What was one more selfie?

"It was really nice to play in front of that crowd with their Serbian flags," Jokic said. "It was a really good feeling for me."

It seemed everyone wanted a piece of Jokic after the third triple-double of his career helped the Nuggets score a much-needed road victory.

"That's the Nikola Jokic fans back in Denver have been waiting to see," Nuggets coach Mike Malone said.

More importantly, it was the kind of complete effort that Denver had been unable to produce since the all-star break. The Nuggets had dropped two of three since the break and had won just two of their previous 10 road games overall. And in the first half against the Bulls, they were dominated on the offensive glass by a 10-1 margin.

Then, the Nuggets flipped the script. Jokic reached the peak of his tour de force performance of 19 points, 16 rebounds and 10 assists in the third quarter, helping the Nuggets close on a 20-8 run to take a 91-83 lead.

The offensive rebound total for the Bulls in the third quarter: zero.

“It was a problem in the first half,” Nuggets forward Danilo Gallinari said, who scored a game-high 22 points and was one of seven Nuggets players in double figures. “We knew we had to turn it around in order to win the game and we did.”

It helped that the Nuggets caught fire in the fourth quarter. They hit five 3-pointers in the first 4½ minutes of the period to push the lead to 21 points. The Nuggets finished 13-of-30 (43 percent) from 3-point range, extending their franchise record of consecutive games with at least 10 3-pointers to 11.

Chicago couldn't muster a run in the face of that long-range display, particularly not with star Jimmy Butler being held to just eight points on 3-of-13 shooting.

"When we defend like that we're a very good team," Malone said.

Jokic appeared to have more energy from the start. He was encouraged by Malone in recent days to relax and play loose. Jokic responded by making his first four shots, including two 3-pointers, and had 10 points, eight rebounds and four assists by halftime.

"I played the same way, but I maybe felt a little bit better shooting the ball," said Jokic, who was 3-of-3 from 3-point range. "Then I started moving. That kind of game happens. I'll forget about this game the same way I forget if I have four points. It's the same thing. I'm just trying to win. That's the only thing that matters."

It was a night of responses for the Nuggets in a game that featured 17 lead changes through the first three quarters. Trailing 47-38 midway through the second quarter, Jamal Murray (nine first-half points) keyed a 17-4 run that helped Denver cut the lead to a single possession at halftime.

The Bulls sprinted to an eight point lead early in the third quarter, sparked by a strong performance from reserve point guard Rajon Rondo. But Jokic kept responding. He had nine points and four assists in the quarter, pushing the Nuggets into the fourth quarter with the eight-point lead.

Then the Nuggets closed harder than Aroldis Chapman, the flame-throwing relief pitcher who helped deliver the Chicago Cubs a World Series title four months ago. Gallinari hit three 3-pointers in the opening four minutes of the fourth period.

The Nuggets kept cruising from there, and a key road trip in the chase of a playoff spot was off on the right, relaxed foot.