PALM BEACH GARDENS — Jack Nicklaus says he was "painting a picture" when he suggested after a practice round with Tiger Woods at the 1996 Masters that Woods had the game to win at least 10 green jackets. 3 Weeks AgoHe referred to Woods as a "puzzle"... 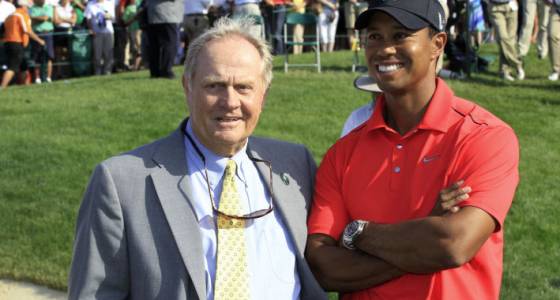 PALM BEACH GARDENS — Jack Nicklaus says he was "painting a picture" when he suggested after a practice round with Tiger Woods at the 1996 Masters that Woods had the game to win at least 10 green jackets.

He referred to Woods as a "puzzle" on Sunday at the Honda Classic.

In an interview before making an appearance in the NBC Sports broadcast booth, Nicklaus was raving about the growing number of young players who can win major championships. He said they learned to win because Woods no longer was dominant as he recovered from a litany of injuries.

"And now, I don't know about Tiger," Nicklaus said. "That is the biggest puzzle to me that I know. I just don't know where he is and where his mind is. I don't know."

Woods missed the cut at Torrey Pines in his 2017 debut, then flew halfway around the world to Dubai and withdrew after 77 with back spasms. Woods withdrew from the Genesis Open at Riviera, hosted by his foundation, and this week's Honda Classic.

He canceled an interview at Riviera, with his agent saying doctors had advised that Woods limit all activities.

Nicklaus referenced a quote from Woods' agent, Mark Steinberg, that a news conference would yield no answers to his health.

"I think he's absolutely right," Nicklaus said. "You're going to ask him the same exact questions, it'll be the same exact answers that he had before. And I think from his standpoint, he'd be tired of answering them."

Nicklaus and Woods long have been linked, from the time Woods posted a chart in his room showing a timeline of Nicklaus achieving various mileposts in golf, mostly as an amateur. As a professional, Woods was on pace to break Nicklaus' record 18 majors until his fourth knee surgery in 2008 following the U.S. Open, his 14th and final major.

A scandal in his personal life unfolded a year later, followed by more leg injuries and then three back surgeries.

Nicklaus and Arnold Palmer played a practice round with Woods when he was a 20-year-old amateur in 1996. After the round, Nicklaus said Woods was "absolutely the most fundamentally sound golfer that I've seen at almost any age."

"Both Arnold and I agree that you could take my Masters and his Masters and add them together and this kid should win more than that," Nicklaus said that day.

Reminded of that comment Sunday, Nicklaus said, "People have quoted that. And I was obviously being a little exaggerating in what I was saying. I was painting a picture that he could win a lot of Masters."