With the NFL draft just three weeks away, we're in a dead period when it comes to major changes in the trenches.No worries, though, because those big uglies are busy squatting, benching, power cleaning, deadlifting and getting those feet right for the upcoming... 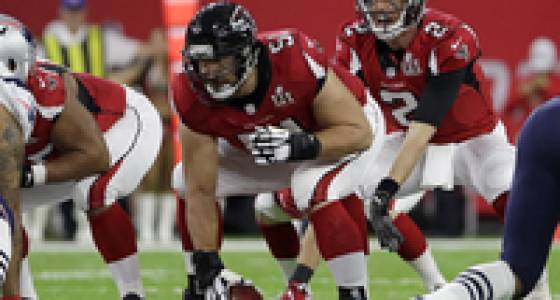 With the NFL draft just three weeks away, we're in a dead period when it comes to major changes in the trenches.

No worries, though, because those big uglies are busy squatting, benching, power cleaning, deadlifting and getting those feet right for the upcoming season. And while we await the hogmolly shake-up, we're taking a look back at the best offensive lines of 2016, with an eye on their outlooks for 2017 and beyond.

I know, it sounds a little strange to me too. But Atlanta's offense was high-flying because its offensive line became a cohesive unit that blocked well in run and pass situations. A two-headed rushing attack of Devonta Freeman and Tevin Coleman thrived inside and outside the tackles because the line, anchored at the center by Alex Mack, managed to open lanes to run. Just look at the Falcons' first two plays of Super Bowl LI: Atlanta ran the same toss sweep (pulling franchise tackle Jake Matthews out into the open field as a lead blocker) twice in a row and found itself on the edge of New England territory as a result.

The running game -- in which Freeman averaged 5.8 yards per carry out of the singleback, and Coleman averaged 4.2 yards out of the I-formation -- was the base for the rest of the offense, which flourished out of various formations thanks to the threat of the potent ground game. Atlanta ran plenty of play action fakes, designed rollouts, bootlegs and even quick-hitting passes out of traditional run formations thanks to this. It forced defenses to be honest, and even when they stacked the box (eight-plus defenders), Atlanta still averaged 5.17 yards on rushing plays.

The result of such reliable trench play was the league's third-best passing offense (in terms of yards), and fifth-best in rushing (120.5 yards per game). Pick your poison.

That Steelers' line? Better than we thought.

A unit that once fluctuated with injuries (namely Maurkice Pouncey) and effectiveness solidified in 2016, and the results were evident. From Pouncey at center to right tackle Marcus Gilbert, Pittsburgh became reliable at four of the five positions. David DeCastro finally neared the potential Pittsburgh had in mind for him when the Steelers selected him in the first round of the 2012 draft. Even left tackle Alejandro Villanueva, a previously perceived weakness who replaced the departed Kelvin Beachum, improved enough to make Pittsburgh's line one of the top five units in the league.

Bell's vision allows this group to do its job consistently, as does the inclusion of a sixth lineman in certain situations where more beef is needed up front. This carried over to the passing game, in which Ben Roethlisberger averaged more than 2.5 seconds in time to throw and was sacked just 17 times. Translation: Big Ben had time to work, and it showed in the stats -- 262.6 yards per game passing (tied for fifth with Indianapolis), 110 yards per game rushing (14th), 24.9 points per game (10th).

Bell finished in the top five in rushing yards (1,268, seven touchdowns), despite only playing in 12 regular season games. Even scarier for opponents: This unit doesn't appear to be going anywhere. With the exception of left guard Ramon Foster, every member of the starting group is 29 years old or younger.

Donald Penn went down at the end of the season, and Menelik Watson was called in to replace him. The Raiders lost to the Texans in the playoffs, going out with so much as a whimper. One of those two is no longer a Raider.

For much of the regular season, the Raiders were the darling of the league, owning hearts near and far (including this writer's). Their resurgence behind a young quarterback in Derek Carr and All-World defender Khalil Mack made for riveting television.

Then Penn gave up his only sack of the season, which coincidentally also resulted in a broken leg for Carr, and it torpedoed Oakland's chances. Weeks later, Watson was getting destroyed by every defender in his path in Houston, and we all got a real-time lesson on how valuable a left tackle truly is.

But this Raiders' line is the sum of its parts, not just one cog. The free agency acquisitions of Kelechi Osemele, Rodney Hudson and Penn paid massive dividends, while Austin Howard's signing in 2014 hasn't hurt, either. Lined up with Gabe Jackson, this unit cleared the way for the since-departed Latavius Murray and promising backs Jalen Richard and DeAndre Washington. That backfield might get a heavyweight addition with a certain mode of beastly nature, creating a ground game that is poised to wallop opponents in 2017.

Carr also was sacked just 16 times in 2016, so that part of the offense should be pretty good too.

Say it with me. Exotic...smashmouth.

Oh, you didn't hear that?

Just watch Bucky Brooks' breakdown of DeMarco Murray in the Exotic Smashmouth that is Tennessee's offense. It's beautiful. But it doesn't work without a line that is young and one of the most, if not the most promising units in the NFL.

Tennessee's run-first offense is predicated on strength and versatility. The Titans can line you up and ram the ball up the middle of the defense. And they can also hurt you repeatedly outside the tackles.

It helps that Marcus Mariota is a mobile quarterback whose feet must be honored. It also doesn't hurt to have two tackles who are only improving by the week in Taylor Lewan and Jack Conklin.

When watching Tennessee, it truly is difficult to find anything major about which to gripe. Left guard Quinton Spain, center Ben Jones, and even right guard Josh Kline -- a Patriots retread who's found new life in Nashville -- were consistently effective in 2016. It showed in the numbers: 2,187 yards rushing (136.7 per game, good for third best in the league), 16 touchdowns, and a close-but-no-cigar finish to the 2016 season. With a starting five that goes 22, 27, 27, 25 and 25 in age from left to right, things are looking up in Nashville.

I'm actually going to spend the least amount of time here, because all you really need is Ezekiel Elliott's rookie tape to understand how good this line is.

As rookie quarterback Dak Prescott got acclimated to the pro game with simpler, quicker passes, Elliott shouldered the load, running through Mack-truck-wide holes to gain huge chunks of yardage. Prescott had time to throw, reliable targets and an even more trustworthy running game, which is all thanks to Dallas' line.

We covered how they were constructed. A collection of wise draft picks plus holdover Doug Free lifted Elliott to the league's lead in rushing yards at 1,631 to go with 15 touchdowns. But Dallas has a new hurdle to clear in the coming months with the fairly surprising retirement of Free, and departure of Ronald Leary in free agency. Instead of going six deep across the line, they now have a hole.

But while we await their move, Dallas in 2016 ranks among the league's best. And until they're proven otherwise, they'll remain atop the throne. But the gap isn't wide between them and the rest.