It all doesn't add up for Vikings running back Adrian Peterson. NFL Scouting Combine: Who are the Jets watching? Not his seemingly inevitable divorce from the Vikings. He has seen that coming for months. What the seven-time Pro Bowler doesn't get is why... 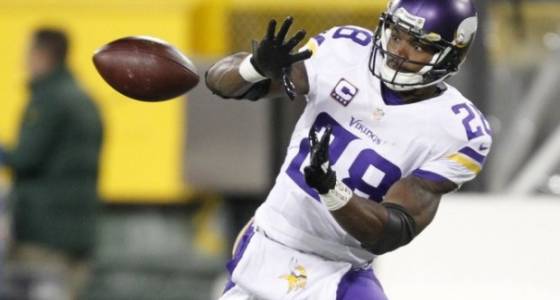 It all doesn't add up for Vikings running back Adrian Peterson.

NFL Scouting Combine: Who are the Jets watching?

Not his seemingly inevitable divorce from the Vikings. He has seen that coming for months. What the seven-time Pro Bowler doesn't get is why some doubt his ability to bounce-back after an injury-plagued 2016?

"Perplexed" was the word he used when talking to ESPN.

Peterson does have a point. Injury recovery is nothing new. In 2011, he tore his ACL and MCL in late December. Peterson not only healed in time for the 2012 season opener eight months later, but finished the year with 2,097 yards rushing and 12 touchdowns. He was later voted league MVP.

The real question is where Peterson will play? He has already been linked to the Giants, Cowboys and Packers.

Tyrod Taylor staying in Buffalo? It has long been assumed Taylor's Bills career was coming to an end. The team did, after all, bench him towards the end of last season. But that might now be the case. According to TheMMQB.com, new Bills offensive coordinator Rick Dennison would like to keep Taylor.

Are the Jaguars really committed to Blake Bortles? Ex-Giants coach Tom Coughlin is now calling the shots in Jacksonville. He has already made his presence felt with a handful of roster changes. Could he be gearing up to make the biggest move yet?

Quarterback Blake Bortles has left much to be desired in his three seasons. Coughlin gave a non-answer when asked by reporters on Friday if he's committed to him.

"There's plenty of work for everybody to do, Blake included," Coughlin said, via PFT. "To raise the game to a higher level, it takes all components as well. That's why I mentioned the protection first of all. Being at the right place at the right time, the timing, taking care of the football, which is paramount to that position. There can be no way the ball is turned over to that extent. I think he'd be the first one to say that he has a lot of work to do, but we all have a lot of work to do; I'm going to put it that way."

Chiefs sign C.J. Spiller, 49ers sign Earl Mitchell. A pair of veterans found new teams on Friday. Spiller is coming off a down season. He spent parts of 2016 with both the Jets and Seahawks. He didn't make much of an impact at either stop. Mitchell received a four-year, $16 million deal. He started five games in 2016.