NFL free agency begins on March 9 and that could mean that the likes of Minnesota Vikings running back Adrian Peterson, Washington Redskins quarterback Kirk Cousins and Chicago Bears quarterback Jay Cutler could be among the veterans on the move when the... 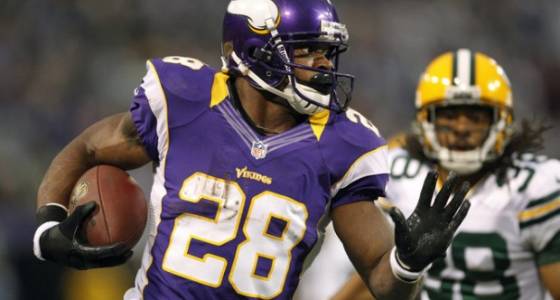 NFL free agency begins on March 9 and that could mean that the likes of Minnesota Vikings running back Adrian Peterson, Washington Redskins quarterback Kirk Cousins and Chicago Bears quarterback Jay Cutler could be among the veterans on the move when the new league-year begins.

Peterson could be the biggest name available on the open market.

Peterson finished an injury-riddled 2016 season with just 37 carries for 72 yards in three games after undergoing surgery to repair a torn meniscus suffered in Week 2 against the Green Bay Packers. Already this offseason, Peterson has been linked to the Giants and the Cowboys.

"The one thing we know about Peterson is that he's not going to be back in Minnesota at that cap number," ESPN's Adam Schefter said recently on 97.5 The Fanatic. "Over the course of the next week at the combine when these meetings happen, the Vikings could sit down with his guy, his agent and go over his contract and see what he's going to take. If Adrian Peterson doesn't want to take less or simply wants out of Minnesota, he could simply say 'yeah, I'll play for this contract or nothing' and then they'd just have to cut him.

"He has a tremendous amount of leverage in Minnesota. The teams he brought up were the Giants, the Buccaneers and the Texans. I've also had people say to watch out for the Cowboys."

According to Jason Cole of Bleacher/Report, Peterson will meet with the Vikings brass along with cornerback terence Newman to discuss their futures with the team:

Agents for RB Adrian Peterson, CB Terence Newman plan to meet with #Vikings next week to assess what the two sides will do going forward.

What's the latest on DeSean Jackson, Cousins and the Redskins free agents? The Redskins attempts to sign quarterback Kirk Cousins to a long-term contract have been well documented and overshadowed the murky futures of the Redskins' other free agents. Players such as DeSean Jackson -- who has been linked to the Eagles and Tampa Bay Buccaneers among others --  Pierre Garcon and others are due to be free agents. However, according to the Washington Post, the Redskins plan on meeting with the agents of their impending free agent players next week at the NFL Scouting Combine in Indianapolis.

Retirement on the table for Jay Cutler? It has been no secret that the Chicago Bears are making a concerted effort to trade Cutler. However, if the Bears are unable to find a dance partner, it seems as though Cutler is having doubts about even returning to the NFL in 2017.

Packers could pursue Charles? The Kansas City Chiefs signed running back C.J. Spiller Friday, which could mark the end of Jamaal Charles' tenure with the Chiefs. Charles is set to count $6.1 million against the cap this season and if he becomes available, the Packers would be interested in the 30-year-old if he becomes available:

If cut, Charles could draw interest from the Packers. He has the versatile skill set the team values from RBs (and wouldn't cost comp pick).