The NFL Combine takes place this week in Indianapolis, which means not only will essentially every NFL draft prospect be in one place, but every general manager and head coach will be as well. What Eagles need to accomplish at NFL Combine Which... 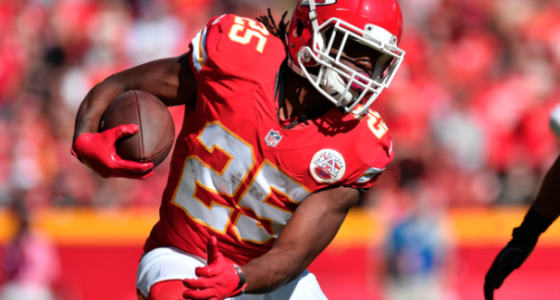 The NFL Combine takes place this week in Indianapolis, which means not only will essentially every NFL draft prospect be in one place, but every general manager and head coach will be as well.

Which is why this is a big week for teams to work the back channels and figure out who will be shaking loose in free agency.

Here are some of the biggest NFL rumors heading in combine week:

Jamaal Charles to Eagles?: The Eagles need to address their skill position players this offseason, and while plenty of focus is on the wide receiver position, that also includes running backs.

One name that could intrigue the Eagles, and might be a free agent soon, is running back Jamaal Charles, who currently plays for the Kansas City Chiefs.

One name worth pondering if he shakes loose is Kansas City Chiefs running back Jamaal Charles. The 30-year-old veteran is set to count more than $6 million against the cap in 2017. The Chiefs, who have only about $5 million in cap space at the moment, just signed C.J. Spiller on Friday, fueling speculation that Charles might be on the move.

Eagles head coach Doug Pederson was Charles' offensive coordinator for three seasons in Kansas City. Safe to say, Charles is a fit for the system Pederson brought to Philadelphia, which is similar to the one Reid runs in Kansas City.

Who will Eagles take in NFL Draft?

Tony Romo to Denver? Where Dallas Cowboys quarterback Tony Romo will end up is one of the biggest questions in the NFL this offseason. The Arizona Cardinals, the Houston Texans and the Jets are all teams that have already been linked to Romo.

If Romo becomes available through his release from the Dallas Cowboys - a transaction many observers deem unavoidable because of his monstrous, if non-guaranteed, remaining contract, plus the team's proven young replacement in Dak Prescott - the Broncos are expected to at least discuss whether to pursue the veteran quarterback.

So will several other teams who are far more famished at quarterback than the Broncos. If the price tag on Romo's new deal becomes $13 million per year, the Broncos may not compete. If Romo is willing to take a few million dollars less to play for a team with an immediate chance to compete for the Super Bowl, it would be surprising if the Broncos didn't listen.

Jay Cutler to Jets? If Romo doesn't make his way to the Jets, one quarterback that could be brought in to finally solve New York's quarterback problem is Jay Cutler of the Chicago Bears.

Cutler is very much on the trade block, and if he isn't traded, it is expected he will be released.

Could he make his way to the Jets via a trade or as a free agent?

There's been a lot of buzz about Jay Cutler (assuming he's released by the Bears), but I don't see him coming to the Jets. Yeah, I know, his old position coach, Jeremy Bates, now works for the Jets, but I'd still be surprised if it happens. Quarterback is a leadership position, and Cutler is not a leader. He's also turnover-prone.