As reported by NJ Advance Media earlier this month, the Eagles are expected to have interest in soon-to-be free agent Kenny Stills once free agency begins on March 7.  What Eagles need to accomplish at NFL Combine Now, it is looking more and... 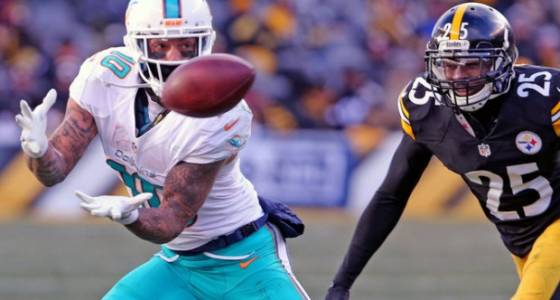 As reported by NJ Advance Media earlier this month, the Eagles are expected to have interest in soon-to-be free agent Kenny Stills once free agency begins on March 7.

Now, it is looking more and more likely that Stills will indeed become a free agent.

According to Armando Salguero of the Miami Herald, the Miami Dolphins are expected to meet with Stills this week in an attempt to gauge whether or not Stills is interested in re-signing with the Dolphins, or if he intends to test the free agency market.

Saguero goes on to report that it is looking like Stills will not be re-signing with the Dolphins, and will be leaving via free agency.

The team most likely to land him?

There is even a team on everyone's lips as a likely landing spot for Stills -- The Philadelphia Eagles.

Kenny Stills to Philadelphia has been an open secret for weeks before agents and teams are officially allowed to talk about potential deals starting March 7. It is so well known in league circles that NJ.com reported weeks ago the Eagles would be targeting Stills if he made it to free agency.

Stills is expected to command around $12 million annually as a free agent, a price tag that is apparently too expensive for the Dolphins.

The Dolphins have committed $16 million in guaranteed money to receiver DeVante Parker, and drafted Rutgers wide receiver Leonte Carroo in the 2016 NFL Draft.

Stills is entering what should be the prime of his career and is capable of making an instant impact. He has 20 touchdowns and a 16.7 yards-per-catch average in four seasons in the NFL.

How much cap space do the Eagles have?

The Eagles' receiving core was one of the worst in the league last season, with Jordan Matthews the only reliable option. It isn't clear if receivers Nelson Agholor and Dorial Green-Beckham will be back with the team.

Although the Eagles have one of the lowest amount of cap space in the NFL (around $15.2 million), they could still give Stills a large deal if he does indeed hit the free agency market.

One example of how they could sign Stills is the contract that was given to Kansas City Chiefs receiver Jeremy Maclin two seasons ago.

During the 2015 offseason, Maclin was given 5-year, $55 million deal from the Kansas City Chiefs, with $22.5 million guaranteed and an average value of $11 million.

That massive deal made Maclin one of the highest paid wide receivers in the NFL, and even two years after the deal, has him as the sixth-highest paid at his position in 2017.

The cap hit in the first year of Maclin's deal? $3.4 million.

For the Eagles, the key to signing Stills will be backloading the deal, which would be easy for the team to do, since they have a ton of cap space in 2018, 2019 and beyond.