The Chicago Bears do not plan on using the franchise tag on wide receiver Alshon Jeffery, according to a report from Ian Rapoport of the NFL Network.  #Bears are not expected to franchise Alshon Jeffery again at > $17M, sources say. A top WR on the... 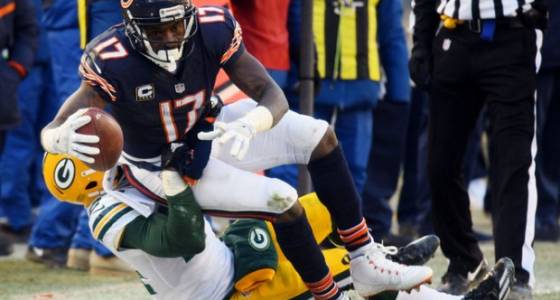 The Chicago Bears do not plan on using the franchise tag on wide receiver Alshon Jeffery, according to a report from Ian Rapoport of the NFL Network.

#Bears are not expected to franchise Alshon Jeffery again at > $17M, sources say. A top WR on the market will generate lots of buzz in Indy

Jeffery is expected to be the top wide receiver available on the open market when free agency begins on March 9 and has been linked to the Eagles in several recent reports.

Last November, the Eagles reportedly attempted to trade for Jeffery prior to November's trade deadline. As executive vice president of football operations Howie Roseman and a revamped personnel department look to bolster the wide receiving corps ahead of quarterback Carson Wentz's second season, making a push for Jeffery would not be surprising.

Last season, Jeffery hauled in 52 receptions for 821 yards and two touchdowns while averaging 15.8 yards per catch in 12 games. However, Jeffery's season was marred by a four-game suspension for violating the NFL's Performance Enhancing Drug policy.

Jeffery could command upwards of $17 million per season on the open market, which could make signing him difficult for Roseman and the cap-strapped Eagles who currently have roughly $10 million in spending flexibility.

Spotrac projects Jeffery's market value at an average salary of $12.2 million per season on a five-year deal worth roughly $61 million. With the franchise tag at the wider receiver position set at $15.8 million and the cap-space rich market in the NFL, Jeffery could potentially command an even more lucrative contract.