Famagusta 14°
overcast clouds
BUSINESS EDUCATION ENTERTAINMENT HEALTH POLITICS SCIENCE SPORTS TECHNOLOGY
10:22 Four Benefits of Hiring a Dedicated Development Team
04:48 Mark Kelly, President of Safety Marking Inc., Discusses Structuring Effective...
17:58 Trump wants to play golf at the Biden swearing-in in Scotland - but is...
17:54 First doubts Regarding tightened Steps: two National Countries Extract...
10:39 Covid-19 : in France, the end of containment and entry into force of the...
04:34 The schools of Rome will use the Internet with light bulbs: what it is...
10:58 Kratom Tea: How Is It?
11:46 Office Furniture Products for you!
12:17 Top Clubs, Their Value, Revenue And Current Standings
11:14 Reasons Why Rewarding Yourself is a Good Practice
BIST
1536
GOLD
438.234
USD
7.3521
GPB
10.1207
EUR
8.9384
Breaking News
Navigating a Hearing Disorder Diagnosis
Close

The Eagles might have found a clever way around the limit on workouts a team can have with prospects in the 2017 NFL Draft.  According to former UNC quarterback Caleb Pressley, the Eagles have been suggesting to quarterback Carson Wentz... 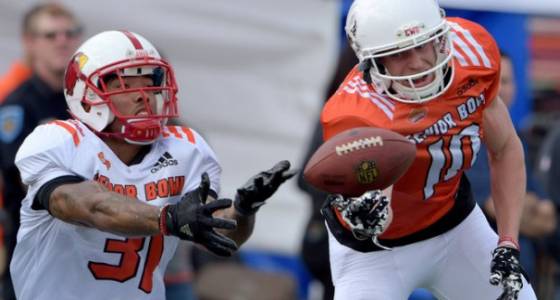 The Eagles might have found a clever way around the limit on workouts a team can have with prospects in the 2017 NFL Draft.

According to former UNC quarterback Caleb Pressley, the Eagles have been suggesting to quarterback Carson Wentz which receivers to workout with, and then presumably report back on what he thought of them.

Here is what Pressley had to say on his latest podcast, via Bleeding Green Nation and Philly Football Talk, about his time spent with both Wentz and current draft prospect Mitch Trubisky, quarterback from UNC, in California.

"[Wentz] was commanding everything. He was telling the receivers 'I want you to stem it, break off to the outside, stem your routes, stutter step it, come back in,' [...] But he's also trying to teach Mitch, I think.

"Also, what they do, is the Eagles, they want [Wentz] to work out with certain receivers. And so those receivers, I think, were all on ... those three receivers coming out of college were all on the Eagles' list. I'm not even sure I'm allowed to say that. But basically the Eagles have eight receivers they're looking at, and those are three of them. So he was there to look at those receivers."

Both Smith-Schuster and Kupp are projected to go in the first two rounds, while Hollins could go undrafted.

The Eagles' biggest position of need this offseason is arguably wide receiver, as both Nelson Agholor and Dorial Green-Beckham had down seasons last year.

Of the three, Kupp seems the most likely to end up on the Eagles.

Kupp is widely considered to be one of the players that helped his draft stock the most at the Senior Bowl in Alabama, where both Roseman and head coach Doug Pederson were present.

Here is more on Kupp, via CBS Sports:

STRENGTHS: Adequate height and length for the position. Gliding straight-line athlete. Crafty route runner, setting up defenders and using hesitation to create spacing. Clearly leans on his technique and trusts it. Sticky hands with the natural coordination to pluck the ball. Excellent awareness at the catch point and doesn't need to gear down to assess his surroundings after the catch. At his best on in-cutting and post routes to manipulate space in the middle of the field. Not shy about using his abusive stiff arm to pick up extra yards, refusing to concede as a ballcarrier. Capable of the big play with 37 receiving plays in his career of at least 40 yards. Clean off the field with excellent work habits.

WEAKNESSES: Marginal long-speed and lacks explosive twitch in his patterns. Relies more on timing/nuance than burst to create separation mid-route. Won't consistently make NFL defenders miss in space. Unthreatening body type and build for the position. Holds the ball too loose from his body, inviting defenders to force turnovers. Needs to improve his hand use to beat press and unglue himself at the top of routes. Missed playing time as a senior due to sprained AC joints in both shoulders (Sept. 2016). Thrived against lesser competition over his career at the FCS-level.