The Leonard Fournette-Dalvin Cook debate on which is the best running back in the 2017 NFL Draft won't be settled anytime soon, but a poll on the subject suggests that it's a bit lopsided. NFL Network analyst Charley Casserly polled representatives from... 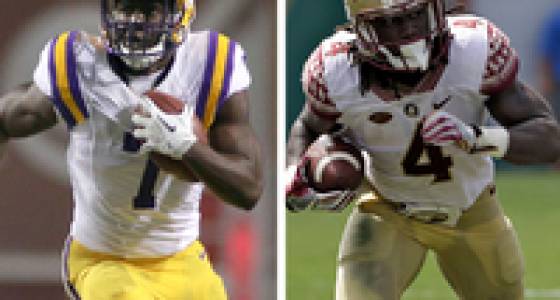 The Leonard Fournette-Dalvin Cook debate on which is the best running back in the 2017 NFL Draft won't be settled anytime soon, but a poll on the subject suggests that it's a bit lopsided. NFL Network analyst Charley Casserly polled representatives from 20 NFL clubs on their preference between the two, and the power back from LSU was the clear choice.

"I polled 20 teams in the league, it was 13 for Fournette, seven for Cook," Casserly said Tuesday on Path to the Draft. "Coming out of college, I loved Adrian Peterson. Everybody else loved him, too. Fournette does a couple things better. He keeps his pads lower, and he's a little bit more instinctive."

That's high praise coming from the former Washington Redskins and Houston Texans general manager, and the near 2-1 margin in the poll speaks volumes, as well. Both were prolific rushers at the college level, both entered the draft as juniors, and both offer exciting possibilities for NFL offenses in need of a backfield jolt.

But their styles are different, leaving scouts considering not only which of the two is better, but also which of the two is the better fit. Fournette, the bigger and stronger of the two, weighed 240 pounds at the NFL Scouting Combine and offers a dynamic combination of size and speed. Cook, of Florida State, is the more accomplished receiver of the two and provides the more well-rounded game. NFL Network draft expert Mike Mayock ranks Cook as the top back in the draft class. Casserly prefers Fournette.

"This guy can run inside, he can run outside, he runs with power, he can catch the ball and make plays after the catch," Casserly said.

It's not a debate that will rest easily, nor one that will be settled on draft day.