Mike Mayock of the NFL Network made it clear Monday that he believes the Eagles should make drafting a wide receiver a priority in the first round of April's NFL Draft and go shopping for a cornerback in the middle to later rounds. ... 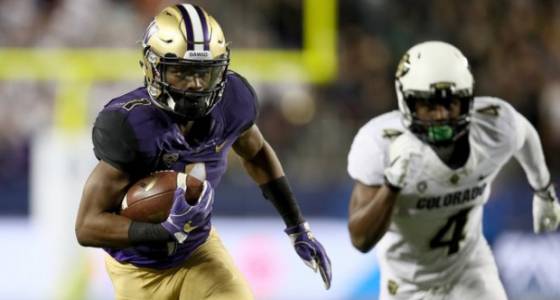 Mike Mayock of the NFL Network made it clear Monday that he believes the Eagles should make drafting a wide receiver a priority in the first round of April's NFL Draft and go shopping for a cornerback in the middle to later rounds.

When it comes to which wide receiver could wind up being the best fit for Doug Pederson's offense, Mayock suggested that Howie Roseman and the Eagles should pull the trigger on choosing John Ross out of Washington if he is available when they go on the clock with either the No. 14 or No. 15 overall pick.

"There are three distinctly different guys," Mayock said of the top wide receivers in this year's draft class during a conference call with reporters Monday. "I think John Ross is intriguing to me from an Eagles perspective. He's got some medical issues.

"Take the medical concerns off the table for a second. He's probably the best vertical threat in the draft. That would help the rest of the Eagles underneath. They desperately need speed. You're talking about a guy that's going to run a 4.35, which I think he will, and he's also quick."

Mayock went so far as to compare Ross to Houston Texans wide receiver Will Fuller, who caught 47 passes for 635 yards and two touchdowns after being chosen with the No. 21 overall pick last year.

"I think Ross has Will Fuller type speed and he ran a 4.33," Mayock said. "I think this kid can run just as fast as Fuller, but he's quicker and I think that he is a better natural pass-catcher than Fuller is. If you take the medical out of it and just say vertical stretch, quick, fast and good hands, Ross is very intriguing as an Eagles prospect."

Ross finished last season with 81 catches for 1,150 yards and 17 touchdowns.

Here is a scouting report of Ross, via NFL.com:

STRENGTHS Has home-run gear to yank the top off of defenses. Vertical speed demands respect and creates open throws underneath. Corners open hips early to turn and sprint, leaving his curl and dig routes unchallenged. Feet are fire. On verticals from the slot, sells the corner route and stems to the post with a burst for easy separation and a comfortable throwing window for the quarterback. Hands are generally solid. Plus hand-eye coordination. Natural ball-tracker who locates the deep ball early and watches it. Dangerous show-and-go open-field ability after the catch. Able to win with slants or fades near the goal line. Eludes the first tackler and can turn a short one into a long one in a heartbeat. Has enough size to work from outside or from the slot. Saw four of his eight carries go for 15-plus yards. Has returned at least one kickoff for a touchdown in each of his three years at Washington. WEAKNESSES: Undersized with below-average play strength. Struggled to get into his routes cleanly and impact the game against the physical cornerbacks at Alabama. Weight will creep too far out over his toes at times. Tape shows occasional stumbles over nothing but turf in his routes and after the catch. Needs to do better job of working back to the throw. Has to learn to make contested catches. Will need to sharpen his short and intermediate routes to become a true three-level target. Has had a major injury to both knees. The long-term health of both knees will be a concern that has to be answered at the combine.