The NFL is considering making referees full-time employees and centralizing replay review at its New York headquarters as it aims for more consistent, shorter games.Those were the major topics of discussion when the league's competition committee met Tuesday... 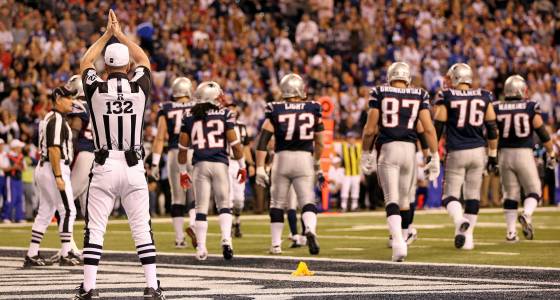 The NFL is considering making referees full-time employees and centralizing replay review at its New York headquarters as it aims for more consistent, shorter games.

Those were the major topics of discussion when the league's competition committee met Tuesday in advance of the league's annual scouting combine.

Falcons president Rich McKay, chairman of the competition committee, noted that the collective bargaining agreement allows the league to hire as many as 17 full-time officials. "That is being discussed," he told The Associated Press after the meeting.

"When you have full-time people you have the ability to train more, to have them work together and therefore speak the same language, watch the same tape and try to create consistency crew to crew," McKay said.

"One of the things that's always been a struggle for us as a league is to be able to have coaches feel like they know going into that week how the game is going to be called because sometimes crews differ."

Broncos boss John Elway, another member of the competition committee, said the caveat is that these referees have successful careers outside of football and they may not want to give up their day jobs.

"There's no question there's some people we feel like we would lose," Elway said.

McKay concurred, suggesting the league would have to "find a way to convince them that this is a good career path and give them enough security and enough money where it works."

He added that "you could still go down a path where it's just one (official) per crew, but I think the discussion point has been referees. We're in the early phases of discussing that."

"There's a lot yet before this would happen," Lewis said, noting the advantages of such a big change would have to be weighed against the probability of losing some really good referees who already have great careers — ones which give them the flexibility to work football games on weekends.

What's driving the discussion, McKay said, is the desire to have more consistency between crews, not necessarily to address any perceived deficiencies in officiating.

"In officiating, better is in the eye of the beholder," McKay said. "But what we should always try to achieve is consistency, predictability."

"You want coaches, fans, players, to have a clear expectation of how a call is going to be made and why. Hey, it doesn't mean it's always going to be right because it is a very difficult job.

"The players are just faster, bigger. So, it's a challenge. But I think our goal should always be to create consistency so that everyone will always know how things are going to be called."

That's no knock on today's officials, who don't have high-definition TVs to see the slightest of infractions fans see.

"Let's not put the standard to them that in super slow motion I can see a jersey tug. Because that's just so unrealistic and so inappropriate and yet we do it and say, 'Well, he should have seen that.' Come on, the guy was moving at full speed, his back's to him and it was a gentle tug," McKay said.

"So, we're never going to be perfect and get everything to the letter of the law, but the idea that we can be consistent and people can anticipate what is going to be called. That should be our object."

The league also is looking at further centralizing replay review in a bid for more consistent calls and speeding up the game.

"We're trying to eliminate as much down time as we can," Elway said.

Another topic the committee addressed was the rule change last season that brought touchbacks out to the 25-yard line instead of the 20 as in college football.

McKay said the change resulted in fewer returns and head injuries in 2016, "so it worked pretty much the way we thought it would."

Elway said it looks as if the experiment will either be extended for 2017 or even implemented permanently after more discussions.