NFL combine preview: Targets, positions of need for every team

With the 2017 scouting combine kicking off this week, NFL Nation reporters take a closer look at the positions of need for all 32 teams and which players will be closely evaluated.Click the link after each team to view the full post.Round 1: April 27, 8 p.m.... 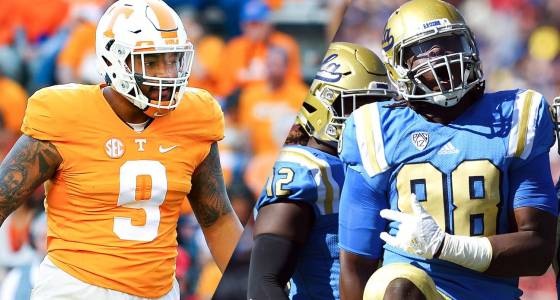 With the 2017 scouting combine kicking off this week, NFL Nation reporters take a closer look at the positions of need for all 32 teams and which players will be closely evaluated.

Arizona Cardinals: The Cardinals have plenty of positions they need to bolster, but none is more important than pass-catchers and cover corners. Read the post here.

Atlanta Falcons: Although the Falcons had much better success pressuring quarterbacks this past season, the defensive line still needs an upgrade. Read the post here.

Baltimore Ravens: The Ravens haven't taken a pass-rusher in the first round since Terrell Suggs in 2003 and could look at Tennessee's Derek Barnett. Read the post here.

Buffalo Bills: An argument can be made that quarterback should still be a top need for the Bills even if Tyrod Taylor is still on the team. Read the post here.

Carolina Panthers: The Panthers are solid at defensive tackle, so that leaves an every-down defensive end and running back as top targets. Read the post here.

Chicago Bears: Chicago is ready to move in a different direction from Jay Cutler, so the Bears have to get serious about drafting a quarterback. Read the post here.

Cincinnati Bengals: Some of the Bengals' defensive veterans have reached an age where the team needs to look for upgrades. Read the post here.

Cleveland Browns: The team's perpetual combine examination of quarterbacks enters phase 7,192, as the Browns will interview the top candidates. Read the post here.

Dallas Cowboys: It can be argued that the Cowboys need help in some form at every position other than running back. But the focus has to be on defense. Read the post here.

Denver Broncos: The offensive front continues to vex the Broncos, and this is the third consecutive offseason they will conduct a makeover there. Read the post here.

Detroit Lions: Needing to upgrade their pass rush and boost the running game, the Lions are likely to eye linemen on both sides of the ball and linebackers. Read the post here.

Green Bay Packers: The Packers have big holes despite finishing a win away from the Super Bowl; they probably will address defense first, but running back is possible. Read the post here.

Houston Texans: Uncertainty at quarterback and holes in the offensive line make those the obvious areas to watch for the Texans. Read the post here.

The annual scouting combine kicks off this week in Indianapolis, and 300 players will audition in front of NFL coaches, scouts and GMs. Check out ESPN.com's coverage of the event.

Jacksonville Jaguars: Offensive line is the Jaguars' top priority this offseason, but defensive end and safety are among other positions they could address in the draft. Read the post here.

Kansas City Chiefs: Even if Jamaal Charles plays in 2017, the Chiefs can't go through another season with that position not as strong as it should be. Read the post here.

Los Angeles Chargers: The Chargers could upgrade by adding an offensive lineman to protect Philip Rivers or another receiver for Rivers to target. Read the post here.

Los Angeles Rams: Ohio State cornerback Gareon Conley is one player the Rams may keep an eye on at the combine as they look to improve their secondary. Read the post here.

Miami Dolphins: The Dolphins should be looking closely at linebackers and offensive line help; Florida linebacker Jarrad Davis could be one solution. Read the post here.

Minnesota Vikings: While the Vikings will take a best-player-available approach at the draft, they'll have a close eye on O-linemen and a deep running back class at the combine. Read the post here.

New England Patriots: Martellus Bennett's solid season could mean a payday elsewhere. Rob Gronkowski is coming off back surgery. So the Patriots need to look at tight ends. Read the post here.

New Orleans Saints: The Saints have needs at every level of their defense, and they should have good options for adding some help with the No. 11 pick. Read the post here.

New York Giants: The Giants revamped their defense last offseason. Now it's time to add playmakers on offense, and a vertical threat at tight end would help. Read the post here.

New York Jets: The Jets, who have one of the most talent-deficient rosters in the NFL, will have their choice of which need to address with the sixth pick. Read the post here.

Oakland Raiders: The Raiders need to find somebody who can help bring pressure on the quarterback -- be it through the pass rush or top-notch downfield coverage. Read the post here.

Philadelphia Eagles: The Eagles are desperate for cornerbacks with both 2016 starters gone; receivers for QB Carson Wentz also will be a priority. Read the post here.

Pittsburgh Steelers: An injection of speed off the edge would elevate an already solid Pittsburgh defense. Read the post here.

San Francisco 49ers: Lacking a long-term quarterback and playmakers at receiver, the 49ers will surely be eyeing the offensive skill players. Read the post here.

Seattle Seahawks: The Seahawks know they have to do a better job of protecting Russell Wilson, so offensive tackle is a big need. Read the post here.

Tampa Bay Buccaneers: The Bucs could use help at receiver, tight end and running back to continue on their upward trajectory. Read the post here.

Tennessee Titans: Finding immediate help at cornerback and receiver is a must for the Titans. Read the post here.

Washington Redskins: The defensive line is a priority, as the Redskins lack high-level young talent to build around. Read the post here.