With the 2017 NFL Draft around the corner, former NFL scout Bucky Brooks and Around The NFL's Conor Orr are breaking down the biggest areas of need for every team in the NFL, division by division. Below is Conor's look at the NFC South.» Round 1:... 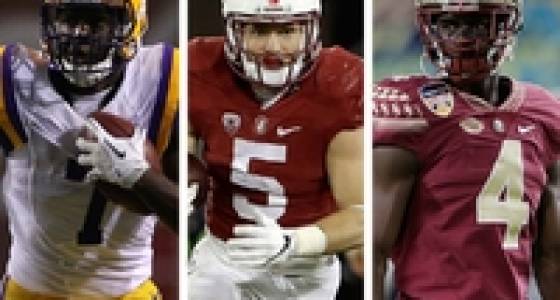 With the 2017 NFL Draft around the corner, former NFL scout Bucky Brooks and Around The NFL's Conor Orr are breaking down the biggest areas of need for every team in the NFL, division by division. Below is Conor's look at the NFC South.

The exciting part about being Falcons general manager Thomas Dimitroff is that you have a Super Bowl-caliber roster and carte blanche from ownership to be aggressive. At the NFL Scouting Combine, Dimitroff already hinted at moving up in the first round -- an homage to his Julio Jones coup -- suggesting that he would not be tied down to the 31st pick. There are plenty of ways Atlanta could go, but layering another talented corner on top of their depth chart would certainly be enticing, as would baking in another situational pass rusher to replace Dwight Freeney. Should they stay at 31, it would not be surprising to see the Falcons kick off a run on what is left of the top-tier offensive linemen. The addition of Alex Mack a season ago was fantastic, but there are still a few holes that could be plugged up front.

This feels like one of those seasons where general manager Dave Gettleman gets to tell us all he was right and we were wrong. His young corners have had another year to develop, as have the young receivers he's placed around Cam Newton. The only thing that seems to be missing is a clear succession plan behind 30-year-old running back Jonathan Stewart. This draft would be a fine one to take care of that. Although the Panthers managed to sign Kawann Short to a long-term deal, they may not have enough money in the bank to keep Star Lotulelei after his option year in 2017. Their defense is built from the defensive line back, which means they may want to get a jump start on replacing one of the league's grittiest inside tackles. As mentioned in previous posts, the offensive line is certainly a cause for concern, too -- but that problem cannot be solved overnight with this crop of tackles and guards. It would not surprise me to see the Panthers move around -- and possibly higher. Gettleman is of the school that you should not be picking this high often, so when you do, you must maximize those opportunities.

The Saints have been lumped into a pool of teams (Cardinals, Giants, Steelers, Chargers) who could -- or should -- be keeping their eyes out for a successor to their franchise passer. With New Orleans holding pick Nos. 11 and 32 in the first round, this draft appears to open up to the Saints nicely and should provide them the ammo to check multiple boxes. Personally, I would go defense with both selections, given how deep the cornerback, linebacker and defensive line classes are. The team will take a step back when Drew Brees retires no matter what, and a cohesive front seven can carry you to many great places. Inspiring play last year from first-rounder Sheldon Rankins and veteran Nick Fairley give us reason to believe this could be a formidable defense sooner rather than later.

In the highly unlikely scenario that one of the draft's best two running backs -- Leonard Fournette or Christian McCaffrey -- fall into their lap, the Buccaneers should pounce. This would provide an immediate replacement scenario for Doug Martin and, in the case of McCaffrey especially, an incredible security blanket for still-developing quarterback Jameis Winston. If the current consensus mock draft machine is to be believed, though, Fournette and McCaffrey will be gobbled up in the top 10, leaving the Buccaneers to decide between Florida State's Dalvin Cook and a heap of talented pass rushers who will dot the remainder of the first round. While Robert Ayers continues to be one of the better late-career value signings in the NFL, it's never too late to start developing a pipeline.