CARSON >> Joao Pedro had never been to the U.S. but was already familiar with its professional soccer league and more importantly, its television programs.“I like comedies like Two and Half Men, How to meet your mother, Big Bang Theory,”... 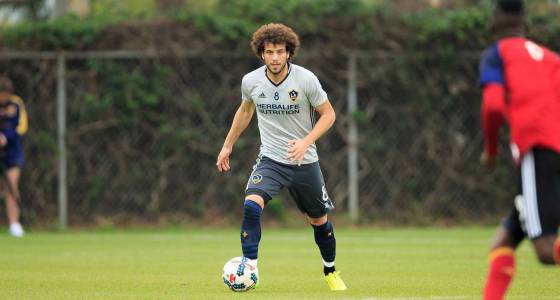 CARSON >> Joao Pedro had never been to the U.S. but was already familiar with its professional soccer league and more importantly, its television programs.

Pedro, who is from Portugal, credits those shows with helping him with the English language.

Pedro can now watch his favorite shows a bit easier now, having moved to the U.S. and joined the Galaxy.

Pedro and the Galaxy will conclude the preseason Saturday against the Portland Timbers at StubHub Center.

After the previous three years with Vitoria Guimaraes of the Portugal first division, Pedro joined the Galaxy this offseason as a Special Discovery Player.

“We see him as a guy that can play in the No. 6 (defensive midfield) role for us,” Galaxy coach Curt Onalfo said. “He brings a very good quality on the ball, so he can help us build out of the back and switching the point of attack.

“He’s very humble and he has a really good way about him.”

Pedro initially joined the Vitoria Guimaraes academy as a 12-year-old.

He has settled in Redondo Beach, but aside from his wife, there’s one thing that he’s been missing.

“They promised me sun,” he said. “But no problem, in Portugal it (the weather) is worst. I’m really enjoying the country and the city. It is good to be here.”

Pedro was brought in as the Galaxy underwent a quick makeover in the midfield. After the departures of Steven Gerrard and Jeff Larentowicz, the Galaxy reloaded with Jermaine Jones, Pedro and new Designated Player Romain Alessandrini. Add in Sebastian Lletget and that’s a versatile midfield unit

“I knew they had a lot of known players, but some of them were old,” Pedro said of the league. “They said to me that they wanted to change it and contact younger players with some quality.”

Pedro has already had an interesting time in the U.S. He trained for the first week he signed in January. He then had to head back to Portugal to iron out Visa issues. He recently rejoined the club.

Now, it is all eyes on March 4 and the start of the new season.

“He has the best years of his career in front of him,” Galaxy general manager Pete Vagenas said. “We think he can immediately help strengthen our midfield.”

That’s what Pedro has set out to do.

“I knew this is a club that wants to win championships, that’s the most exciting part of me being here is I can win cups and the championships and I want to,”

Pedro ultimately has dreams of putting on the national team jersey for his native Portugal, but as of now, is focusing on his surroundings.

“The national team is really strong in midfield and they have a lot of promising talent,” he said. “I want to, but it is not something I’m concerned about. I’m only concerned with what I have to do every day for the Galaxy.”

Update: With the regular season one week away, there are some concerns facing the Galaxy, especially on the back line. Starting right back Robbie Rogers is still recovering from offseason ankle surgery and left back Ashley Cole is now dealing with a calf injury. Tonight is the first game that Galaxy fans can take shuttles to and from StubHub Center, as part of the new partnership with Long Beach Transit. The Galaxy Express will run every 10 minutes beginning 90 minutes before kickoff and through the 15th minute. The shuttle will run for 45 minutes after the game. There are two pick up/drop off locations: Harbor Gateway Transit Center (731 W. 182nd St., Gardena and Del Amo Station (Metro Blue Line).