MURRIETA >> It was a punch to the gut.Vista Murrieta went wild after scoring a goal in the 78th minute in the CIF Southern Section Division 2 girls soccer quarterfinal against Newbury Park on Friday.But wait, Newbury Park might have been given a reprieve,... 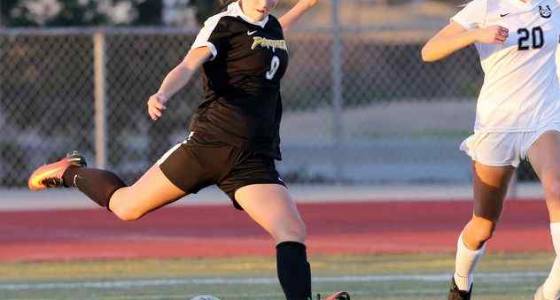 MURRIETA >> It was a punch to the gut.

Vista Murrieta went wild after scoring a goal in the 78th minute in the CIF Southern Section Division 2 girls soccer quarterfinal against Newbury Park on Friday.

But wait, Newbury Park might have been given a reprieve, a standing 10 count.

The sideline official had raised his flag to signal an offside call. Surely these teams would go to extra time to determine which team advances.

The head official quickly ran to the sideline, had a quick conference with his sideline official and waved off the offside call, giving Vista Murrieta a controversial 4-3 victory over Newbury Park to overshadow an otherwise taut thriller and advance to Tuesday’s semifinal against Moorpark.

“That was an absolute shame,” Newbury Park coach Tony Cortez said. “Plain and simple, we got robbed. Not to take anything away from their team or their coaching staff, but that’s just not right.

“I’m super proud of our girls and the way we played. There’s nothing disappointing in what we did. I’m disappointed in the referees to take the game away from us like that. It’s just wrong.”

The Newbury Park players collapsed to the ground with the final whistle, most in tears as Vista Murrieta (19-4-2) celebrated.

The explanation given to the Newbury Park coaching staff following the match was that the sideline official meant to call a foul that happened away from the ball.

But the Newbury Park coaches pointed out that if the sideline official were calling for a foul, he would be waving his flag instead of raising it straight into the air.

To them, there was no doubt the sideline official saw an offside penalty.

“That’s the reason we have so much pain,” Meyer said. “To have a controversial ending like that is heartbreaking.”

“If there’s a sideline ref, you should use him. You need to trust him,” Newbury Park’s Tara McKeown said.

The USC-bound McKeown was inconsolable after playing in her final high school match.

Though McKeown is set to join the U.S. U-20 national team in La Manga, Spain from Sunday through July 8 — something she planned to tell her teammates afterward — the sting of this loss hit her hard.

To make that trip, McKeown would have had to miss Newbury Park’s semifinal and final if it advanced due to national team duties. She had been hopeful of returning to the Southern California Regionals if Newbury Park made it that far, though those hopes are likely dashed now.

“It sucks. That’s how my high school career ends,” McKeown said. “I’m really excited to get an opportunity with the U20 team, but it sucks how we have to end off on this note. I’m going to try to go in with the best attitude I can have though.”

McKeown did everything she could to send her team to that next round.

She scored a quick-strike goal in the third minute while beating several defenders on a turn and added another goal in the 50th minute when she beat the Vista Murrieta goalkeeper to a ball that landed in-between them ball and poked it into the goal for a 3-2 lead.

“I knew this was going to be my last game win or lose, and I wanted to play my best and leave it on the field,” McKeown said. “I think my teammates would have understood. Opportunities like this don’t come often. And they would’ve done just fine without me.”

A minute after Vista Murrieta scored an equalizer in the 15th minute, Meyer lofted a free kick to the corner of the goal and unleashed a candidate for one of the best celebrations of the year.

“I felt I hadn’t been playing that well up to that point, so when I took the free kick, I thought if I scored it could turn the game around,” Meyer said. “I knew where I wanted to hit it, and by chance, it went there.

“That’s when my teammates jumped into my arms. It was an awesome feeling.”

Newbury Park had leads of 1-0, 2-1 and 3-2 but could not hold off Vista Murrieta’s high-powered offense.

“That was just two great teams going at it,” Cortez said. “I’m super proud of our girls. They left it all on the field, and that’s really all you can ask.”