Over the past two seasons, the Blackhawks traded for Antoine Vermette, Andrew Desjardins, Kimmo Timonen, Dale Weise, Tomas Fleischmann and Andrew Ladd with hopes that they could help lift them to a Stanley Cup title.Other than Ladd, none had played for the... 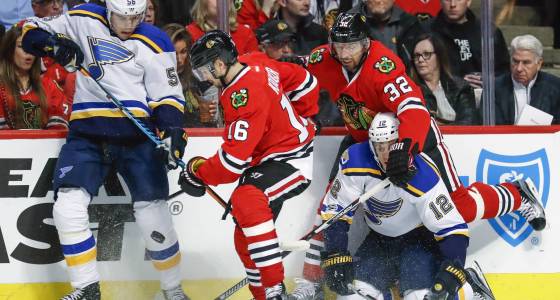 Over the past two seasons, the Blackhawks traded for Antoine Vermette, Andrew Desjardins, Kimmo Timonen, Dale Weise, Tomas Fleischmann and Andrew Ladd with hopes that they could help lift them to a Stanley Cup title.

Other than Ladd, none had played for the Hawks, and it showed in varying degrees.

For as integral as Desjardins and Vermette were in the 2015 title run, they still experienced plenty of issues and were at times healthy scratches in the playoffs. Weise and Fleischmann never really fit in and it's safe to say that trade with Montreal was a bust.

"It's kind of a learning curve or getting used to playing a certain way," Desjardins said before the Hawks beat St. Louis 4-2 at the United Center on Sunday. "Every team, every coach, every system has tendencies.

"(You) need to pick up on those as quick as possible to make those instinct, (and) not where you have to think about it. That's the biggest thing."

GM Stan Bowman's latest acquisition is winger Tomas Jurco, who made his Hawks debut against the Blues skating with Marcus Kruger and Marian Hossa. Bowman is hoping a fresh start will reinvigorate a player he believes possesses high-end offensive skill.

Joel Quenneville wouldn't say how long a leash he'll give Jurco, but the coach did say "he's going to get a chance to play. Hopefully he can fit in and get more as we go along here."

Jurco looked fairly comfortable in his first game, getting 2 shots on goal in 12:44 of ice time.

Adding Tomas Jurco to the mix obviously means a player like Dennis Rasmussen suddenly finds himself on the outside looking in. Sunday against St. Louis, Rasmussen missed just his fourth game since breaking into the lineup in Game 3.

"That's what happens when you've got competition for jobs," Quenneville said. "But he gives us some depth, he came in this year and took a spot that probably wasn't even there for him and he (got) more and more (time) based on how he played. We still think he's going to be very useful for us."

Rasmussen has 4 goals and 4 assists in 57 games.

Even though he was playing center, Marcus Kruger averaged just 2.1 faceoffs per game after he returned from an upper-body injury on Jan. 26. The Hawks often had Dennis Rasmussen taking the draws as they remained cautious with Kruger. Rasmussen, however, did not play Sunday and Kruger ended up going 5-for-11 on faceoffs.

Four Hawks have recorded hat tricks this season: Richard Panik, Ryan Hartman, Jonathan Toews and Patrick Kane. … Before Sunday's action, the Hawks were the only team to feature seven players with 15 or more goals. … Duncan Keith recorded the 500th point of his career by assisting on Patrick Kane's first-period goal Sunday.