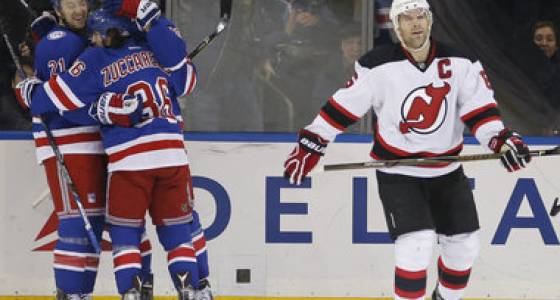 NEWARK -- Taylor Hall, Cory Schneider and Kyle Palmieri will lead the New Jersey Devils into a battle against the rival New York Rangers, featuring Chris Kreider, Mika Zibanejad, Jimmy Vesey and Kevin Hayes, at 5 p.m. on Saturday at the Prudential Center. It will be the first meeting in Newark between the two rivals this season.

Join NJ.com's live chat during the game in the comments section below. You can also follow along with live score and stat updates above.

Here's what you need to know about the game:

Why Devils are entering most important stretch of season

More to know: The Devils will roll with a similar lineup to Tuesday's 2-1 loss to the Ottawa Senators, with the exception of Zacha. Beau Bennett will rejoin the Devils' lineup in his place.

Defenseman Seth Helgeson cleared waivers on Saturday, but he will stay with the Devils. They now have the flexibility of optioning him to Albany (AHL) if they want to make a move.

How Severson views his offensive game

Here are the projected lines and pairings for the Devils against the Senators. Coach John Hynes said he could mix up the second and fourth lines as to where Bennett jumps in, but the first and third lines will stay the same.