Even when he was the smallest player on the court—and he was that throughout much of his childhood—Cameron Payne allowed himself to dream big.The dream started to become reality when as a point guard playing for a small private high school in Memphis,... 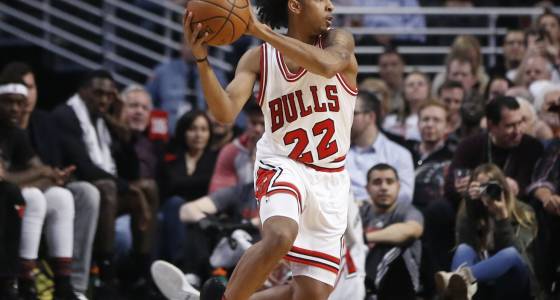 Even when he was the smallest player on the court—and he was that throughout much of his childhood—Cameron Payne allowed himself to dream big.

The dream started to become reality when as a point guard playing for a small private high school in Memphis, Payne's height shot from around 5-foot-5 as a freshman to 6-foot his senior year.

"It just came out of nowhere," Payne said. "Honestly, I didn't feel the difference, I just saw it. I still felt small because I was still skinny as a toothpick. I knew I was good enough to make college — I got a couple of looks when I was playing AAU ball — but by that 12th grade year I grew to about 6-foot and it completed my game because all I needed was a little height."

The final two inches came following his senior year at Lausanne Collegiate School and transformed him into a sought-after commodity that had the University of Memphis calling. But Payne kept to his commitment with mid-major Murray State where he immediately went from backup point guard to starter due to an injury to the incumbent No. 1.

Two years later, Payne was the Ohio Valley Conference Player of the year and then an NBA lottery pick when the Thunder selected him at No. 14 in the 2015 draft. Now, after being acquired by the Bulls as the centerpiece of the Feb. 23 trade with the Thunder that also landed Anthony Morrow and Joffrey Lauvergne in exchange for Taj Gibson, Doug McDermott and a 2018 second-round draft pick, Payne is the potential Bulls point guard of the future.

His new location is in itself head-spinning for the 22-year-old.

"I'm star struck when it comes to the Chicago Bulls," Payne said. "All of those great guys who played here and now I'm playing here. It's unbelievable to me. I'm so happy, it's crazy. I still can't believe it."

Neither can his father, Tony Payne Sr., who coached his son at various levels from age 3 to 18. He can't remember a time when Cameron didn't have a basketball in his hands.

"He came into this world playing ball," Payne Sr. said. "From the toddler basketball goal we set up to when he was 5 and playing against 9 year olds to now, he's always loved the game."

And he loved it with a passion.

"He was ferocious," Payne Sr. said. "His desire to win was so intense that we were always calling him 'Partly Cloudy' because we didn't know what we were getting. He played with passion all the time. He would do whatever it takes to win. He's that kind of guy when you ask, 'what would you do to win, what would you sacrifice?' He'll sacrifice anything to win."

A point guard himself during his playing days, Payne Sr. taught Cameron lessons that he utilizes to this day.

"The first thing he taught me was to always push the ball, dribble with your head up and get your teammates involved," Cameron Payne said. "If my guys are running down the court slapping hands you're making sure they stay happy. Then they come play defense for you. Those are big-time things he taught me coming up through my youth."

The Bulls are hoping Payne blossoms into the player who makes his teammates productive and happy. It has been a mixed bag in his first two outings with the Bulls. Payne has scored six points and nailed two 3-pointers in each of his first two games with the Bulls but struggled from the floor with a 2-for-10 effort during a 125-107 loss to the Nuggets Tuesday night at the United Center.

"I really like how quickly he's picked things up," Bulls coach Fred Hoiberg said. "I love his work ethic. He's asking questions. I think he wants to be great."

The Bulls are hoping a change in scenery will benefit Payne, who wasn't afforded the best opportunity to develop while stuck behind star Russell Westbrook in the Thunder rotation. Payne is averaging six points and two assists in 14.5 minutes per game during his career.

"It was tough playing with Russell but I learned so much — he taught me so much on and off the court," Payne said. "He taught me how to think the game more and showed me the small things that are big for the game."

Putting it all together is the next step for Payne, who said he continues to live his dream.