The Nets waived forward Luis Scola on Monday, parting ways with their oldest player, who had an impact in the locker room but less so on the court.The 36-year-old Scola had fallen out of the rotation with the Nets (9-49) predictably going with younger players.... 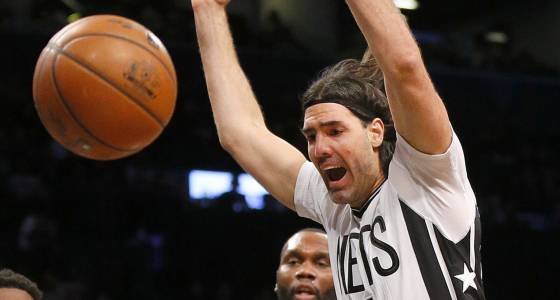 The Nets waived forward Luis Scola on Monday, parting ways with their oldest player, who had an impact in the locker room but less so on the court.

The 36-year-old Scola had fallen out of the rotation with the Nets (9-49) predictably going with younger players. They likely will give more playing time to high-energy forward Quincy Acy (once he returns from injury) and newly acquired Andrew Nicholson. Scola had played just 27 minutes this month, mustering a grand total of one point.

“We appreciate everything Luis has done for our team this year. His approach and dedication to the game will continue to serve as lasting models for our young players,’’ general manager Sean Marks said in a statement. “While we would have loved for Luis to be with us for the remainder of the season, we felt he deserved the opportunity to contribute to a playoff contender.”

Scola signed a one-year, $5 million deal this offseason. The Nets hoped his strong play would carry over from last season, when he started 76 games for a Raptors team that made the Eastern Conference finals and shot a career-best 40.4 percent from 3-point range. It didn’t happen. Scola averaged just 5.1 points, 3.9 boards and 34.0 percent shooting from deep in 36 games for Brooklyn. It’s unclear if Scola was bought out.

The Nets now have an open roster spot, and as teams keep waiving players, there are options out there such as Jared Sullinger and Terrence Jones. The Nets next play Wednesday at Sacramento.

Scola has career averages of 12.0 points and 6.7 boards in 743 games with the Rockets, Suns, Pacers, Raptors and Nets. He won an Olympic gold medal with Argentina in 2004, and reached the quarterfinals again this past summer in Rio.