The heavy-lifting is over. Seton Hall prevailed in its must-win games, knocking off No. 23 Creighton and Xavier during a mammoth three-game homestand that put the Pirates on the right side of the NCAA Tournament bubble. But the Pirates shouldn’t start making... 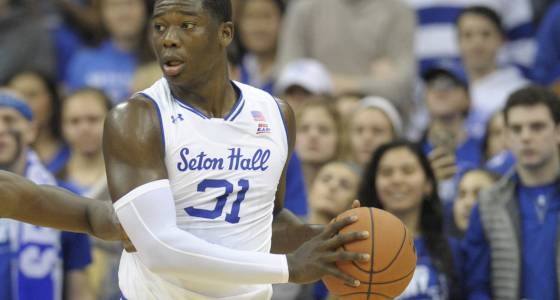 The heavy-lifting is over. Seton Hall prevailed in its must-win games, knocking off No. 23 Creighton and Xavier during a mammoth three-game homestand that put the Pirates on the right side of the NCAA Tournament bubble.

But the Pirates shouldn’t start making March plans quite yet — not unless they can handle prosperity as well as they have dealt with adversity.

On paper, the next two games — at DePaul on Saturday, home for Georgetown on Tuesday — should be stress-free victories. But, that was supposed to be the case against St. John’s, too, before that Feb. 11 game became a lopsided loss that nearly ruined Seton Hall’s season.

While coach Kevin Willard’s team obliterated last place DePaul, 87-56, on Jan. 7, and swept the Blue Demons a year ago, recent trips to Chicago have been tricky.

In fact, before winning there a year ago, Seton Hall (17-10, 7-8 Big East) had dropped three of four at DePaul, highlighted by a 28-point defeat in the 2011-12 Big East regular season finale that derailed the Pirates’ NCAA Tournament hopes. And DePaul is coming off a victory at Georgetown, snapping a 10-game losing streak.

“I think [DePaul senior guard] Billy Garrett played one of his best all-around games [at Georgetown],” Willard said on the Big East coaches’ conference call this week. “He’s extremely tough. Any game on the road in this conference is a really tough test. We’re going to have to really do a job on Billy Garrett and Eli Cain.”

Willard’s group, however, is playing its best basketball of the season, winning four of its past six. The stingy defense has returned and the Pirates have ridden the dominant inside play of junior forward Angel Delgado, the nation’s leading rebounder (13.1). He has notched double-doubles in 20 of his past 21 games and should be an All-Big East first team lock.

Delgado repeatedly has said personal accolades don’t matter. He wants another shot at the NCAA Tournament. That won’t happen unless Seton Hall takes care of business against DePaul and ninth-place Georgetown.

“We want to close this out with a bang,” junior Desi Rodriguez said after the win over Xavier.