Despite all of the rumors surrounding the 2017 NBA trade deadline, Thursday wasn’t nearly as eventful as many hoped it might be. A few notable players switched teams, but no All-Stars were traded to contenders.All eyes were on the Boston Celtics, who had... 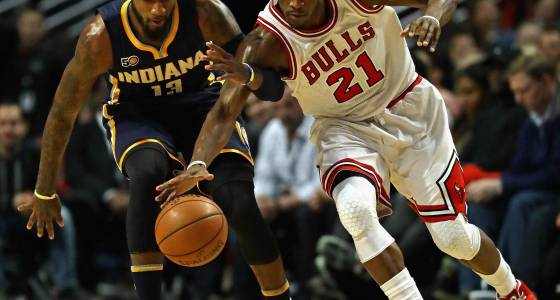 Despite all of the rumors surrounding the 2017 NBA trade deadline, Thursday wasn’t nearly as eventful as many hoped it might be. A few notable players switched teams, but no All-Stars were traded to contenders.

All eyes were on the Boston Celtics, who had been in conversations with the Chicago Bulls about Jimmy Butler and the Indiana Pacers about Paul George. Despite owning top picks in the next two drafts, Boston was unable to get a deal done.

The Vertical’s Adrian Wojnarowski reported that Chicago was seeking core players on Boston’s roster in return for Butler, rather than landing future draft picks and completely rebuilding their team. Indiana also reportedly asked for a substantial package, preventing a deal from getting done. There were reportedly discussions between Indiana and the Denver Nuggets as well, but a deal wasn’t done because of Denver’s unwillingness to trade Nikola Jokic, according to Wojnarowski.

There had been rumors in recent days that the Celtics discussed the possibility of acquiring Blake Griffin from the Los Angeles Clippers, but it doesn’t seem like a trade was ever close to being made. The same goes for Boston and Carmelo Anthony, whom the New York Knicks were looking to unload at the right price.

It looked like the Knicks were going to be able to trade Derrick Rose at one point. They were in discussions about swapping their point guard for Ricky Rubio, but ESPN’s Marc Stein reported that the Minnesota Timberwolves decided to walk away from a potential deal.

Boston had been looking to upgrade their roster and challenge the Cleveland Cavaliers, who have reached the NBA Finals in consecutive seasons. Boston is the No. 2 seed in the East, but LeBron James and Co. remain heavy favorites in the East now that the Celtics have stood pat.

The Toronto Raptors, who took the Cavs to six games in last year’s Eastern Conference Finals, made the biggest roster upgrades of any contender ahead of Thursday’s deadline. A week after trading for Serge Ibaka, the team acquired P.J. Tucker from the Phoenix Suns. Toronto is tied for the fourth-best record in the East.

Battling for the final playoff spots in the West, the Oklahoma City Thunder and Dallas Mavericks made the biggest deals in the deadline’s final hours. Dallas acquired Nerlens Noel from the Philadelphia 76ers, trading away Andrew Bogut, Justin Anderson and a conditional draft pick. Oklahoma City sent Cameron Payne, Anthony Morrow and Joffrey Lauvergne to the Bulls in exchange for Taj Gibson and Doug McDermott.

Other deadline-day deals include Mike Scott to the Phoenix Suns, Tyler Ennis to the Los Angeles Lakers and Roy Hibbert to Denver. The Houston Rockets also sent K.J. Daniels to the Brooklyn Nets.

Philadelphia had been fielding offers for Jahlil Okafor, but the big man remains on the 76ers.