NBA Playoff Picture 2017: What The Bulls, Heat, Pacers Need To Make The Postseason

With the 2017 NBA playoffs less than a week away, the postseason picture remains very much in the air. Two playoff berths have to be clinched with three days left on the regular-season schedule, and only seven of the 16 seeds have been solidified.The... 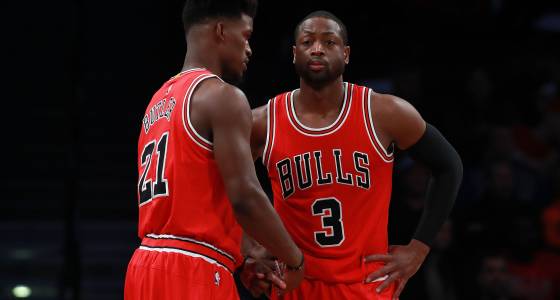 With the 2017 NBA playoffs less than a week away, the postseason picture remains very much in the air. Two playoff berths have to be clinched with three days left on the regular-season schedule, and only seven of the 16 seeds have been solidified.

The biggest questions are in the Eastern Conference, where the Indiana Pacers, Chicago Bulls and Miami Heat are fighting for the No.7 and No.8 seeds. The Cleveland Cavaliers and Boston Celtics are still contending for the No.1 seed and home-court advantage until the NBA Finals, and the No.4 Washington Wizards are the only team in the East that knows their exact playoff seeding.

As the conference’s No.7 seed heading into Monday night’s games, the Pacers have a good chance to clinch a playoff berth. Indiana is in the postseason with a victory, as well as a loss by either the Bulls or Heat. Indiana visits the Philadelphia 76ers, who are out of contention and have lost six straight games, all against postseason teams. Miami hosts Cleveland and Chicago hosts the Orlando Magic.

Chicago and Miami have the same record with two games left, but the Bulls own the tiebreaker. The Bulls are in the postseason with a win and a Miami loss. The Heat visit the Wizards Wednesday, and Chicago concludes the season at home against the Brooklyn Nets, who own the league’s worst record.

Here’s every NBA playoff scenario on the final day of the season. Per #NBA pic.twitter.com/1K75hArmND

Jimmy Butler and Dwyane Wade, pictured at Barclays Center on Oct. 31, 2016 in New York City, are trying to get the Chicago Bulls into the 2017 NBA playoffs. Photo: Getty Images

Cleveland blew a 26-point, fourth-quarter lead Sunday, and their loss gave them the same record as Boston. The Cavs hold the tiebreaker in the race for the No.1 seed, and they can clinch home-court advantage with a win and a loss by the Celtics. Boston ends the season with home games against the Nets and the No.6 seed Milwaukee Bucks.

Either Boston or the Toronto Raptors will have the No.3 seed. The Atlanta Hawks will finish anywhere from No.5 to No.7, and the Bucks can be as high as the No.5 seed or as low as the No.8 seed.

Over in the Western Conference, most of the seeding has been decided. Russell Westbrook’s game-winning three-pointer Sunday afternoon eliminated the Denver Nuggets from contention, solidifying the eight-team field in the West.

Sharing the same record with two games left on the schedule, the Utah Jazz and Los Angeles Clippers are the only teams in the West with anything to play for. Competing for the No.4 seed and home-court advantage in the first round, they are guaranteed to face each other when the postseason begins this weekend. The Clippers own the tiebreaker, and the Jazz will be relegated to the No.5 seed if Utah loses to the Golden State Warriors and L.A. can beat the Houston Rockets Monday night.

Golden State has solidified home-court advantage throughout the playoffs for a third straight year, and they’re headed for a first-round matchup with the Portland Trail Blazers. The No.2 San Antonio Spurs will face the No.7 Memphis Grizzlies, and No.3 Houston will take on No.6 Oklahoma City in a battle of the NBA’s top two MVP candidates.