F1's overhaul of the 2017 regulations has strengthened, not weakened, world champions Mercedes, according to the sport's new motorsport chief Ross Brawn.This year's cars have been made wider and given more downforce, with the early days of winter testing... 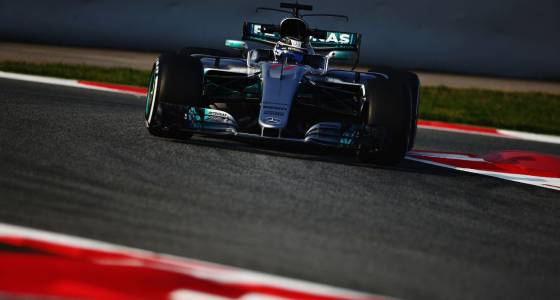 F1's overhaul of the 2017 regulations has strengthened, not weakened, world champions Mercedes, according to the sport's new motorsport chief Ross Brawn.

This year's cars have been made wider and given more downforce, with the early days of winter testing suggesting a dramatic drop in lap times as promised. The scale of the changes led to speculation of a dramatic shake-up of the pecking order after three years of utter Mercedes dominance since the implementation of V6 turbo engines in 2014.

But the reigning world champions have looked stronger than ever in 2017, accumulating 320 laps in the first two days of pre-season alone. Brawn, who has accused F1 of being short-sighted in recent years, thinks the rule change is a good example of where F1 has been going wrong in recent seasons.

"We expose ourselves whenever we make changes like this," Brawn told Sky Sports. "Fingers crossed, it is going to work out but l think it is a good example of where we didn't go through the right principles to begin with. And if this was a principle to stop Mercedes winning, you could argue the exact contrary.

"A team that strong and with that resource will relish change. It was naïve to think it would destabilise Mercedes. If anything it gave them an advantage."

Brawn's return to F1 coincided with the demise of Manor, who fell into bankruptcy ahead of the new season. Another key consideration for the Englishman in the early months of his new job is how to level the playing field for some of the sport's smaller teams.

"In the long run, we need to make sure more teams have the capability to compete. At the bottom of the grid, the commercial consideration of the driver is much stronger than it is at the front of the grid. If we can put the smaller teams on a sounder footing then l think the whole sport will improve and you will get more [Max] Verstappens coming through than you do now."