CaptionCloseWelcome to spring training, Bryce Harper. The swing looks pretty good.Harper hit a long solo homer and a single, helping the Washington Nationals to an 8-6 victory over the New York Mets on Saturday at Port St. Lucie, Fla.Andrew Stevenson and... 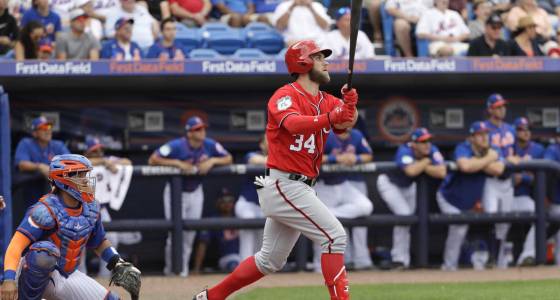 Harper hit a long solo homer and a single, helping the Washington Nationals to an 8-6 victory over the New York Mets on Saturday at Port St. Lucie, Fla.

Andrew Stevenson and Matt Skole also connected for Washington, and Gio Gonzalez struck out one in a scoreless first inning. Joe Nathan, bidding to fill the Nationals' closer spot, gave up one hit in a scoreless third inning.

Mets catcher Kevin Plawecki injured his left leg in a collision at the plate with Washington prospect Rafael Bautista and had to be helped off the field. New York's Gavin Cecchini went 1-for-1 with two walks and scored twice.

Harper led off the second inning with a drive to right-center against Sean Gilmartin in his first at-bat of spring training, then singled in the fourth.

Mets first baseman Lucas Duda sat out with stiffness in his hips.

With teams lined up on the foul lines, the Rangers' Carlos Gomez and Adrian Beltre placed flowers on the mound. After highlights of Ventura's career were shown on the videoboard, Royals manager Ned Yost was given a plaque honoring the pitcher, who died Jan. 22 in a car accident in the Dominican Republic.

Michael Bourn had a major setback in his attempt to make the Baltimore Orioles, breaking a finger while playing catch with a football during a team workout.

Bourn spent the final month of the 2016 season with Baltimore. If added to the 40-man roster, he would get a $2 million, one-year contract.