CaptionCloseDaytona Beach, Fla. The good news for NASCAR is that all signs indicate Dale Earnhardt Jr. has a legitimate shot to win the Daytona 500.A victory for NASCAR's most popular driver, in his return to racing after a concussion sidelined him the second... 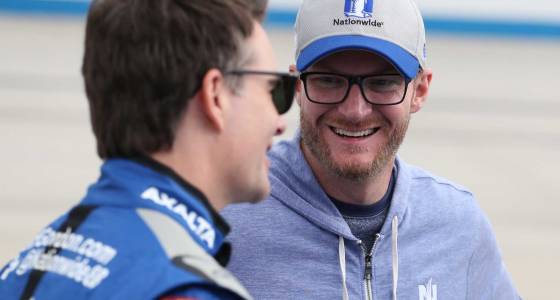 The good news for NASCAR is that all signs indicate Dale Earnhardt Jr. has a legitimate shot to win the Daytona 500.

It means Sunday could be a strong opening day for NASCAR, particularly if Earnhardt can pull off his third victory in "The Great American Race." He's not ready to call himself a favorite, and thinks he'll have his hands full with the Joe Gibbs Racing group and Penske drivers Joey Logano and Brad Keselowski.

NASCAR needs Sunday to go off without a hitch.

NASCAR has countered with a JGR announcement that defending race winner Denny Hamlin and FedEx have signed long-term extensions, while Team Penske locked in Logano and Shell-Pennzoil through 2023.

Both FedEx and Shell-Pennzoil are major sponsors who spend something close to $20 million a year to brand the race cars and market to the NASCAR audience.

NASCAR will launch a new advertising campaign on Sunday called "Ready. Set. Race." and a crash-filled 30-second TV ad was revealed Saturday to promote the 500.

It's a risky move for NASCAR. Some fans, particularly longtime watchers, are horrified at the gimmicks NASCAR is using, but a rising crop of young drivers are eager to give it a try.

I CAN SEE WHY THE STANDS ARE EMPTY ,NASCAR HAS RUINED THE SPORT BUY CONSTANTLY MAKING CHANGES AND FAR TO MANY CAUTION LAPS.AS FOR WATCHING IT ON TV, THIER ARE MORE COMERCIAL BREAKS THEN ACTUAL RACING.