Myriad issues have conspired against CU Buffs hoops in 2016-17

It wasn't always this maddening.On Nov. 22 in Brooklyn, in fact, the Colorado Buffaloes offered a tantalizing glimpse at their potential. That glimpse proved fleeting, yet at the time it was undeniably stirring. Rebounding from a tough loss against Notre... 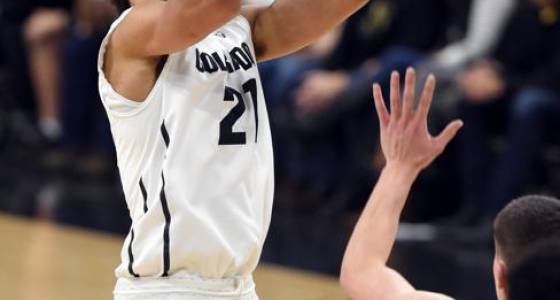 It wasn't always this maddening.

On Nov. 22 in Brooklyn, in fact, the Colorado Buffaloes offered a tantalizing glimpse at their potential. That glimpse proved fleeting, yet at the time it was undeniably stirring.

Rebounding from a tough loss against Notre Dame the previous day in the Legends Classic, coach Tad Boyle's club clung to a three-point lead against the No. 22-ranked Longhorns with 5 minutes, 12 seconds remaining. Texas owned the momentum, having reeled off an 11-2 run. From there, though, the experience and poise of a veteran CU team that reached the NCAA Tournament in four of the previous five seasons took over against the younger Longhorns.

A layup from Josh Fortune sparked a game-closing 14-3 run by CU, turning a dogfight into a comfortable win and sending the Buffs back to Boulder feeling satisfied with how they acquitted themselves against a pair of reputable national opponents. Moreover, CU's four fifth-year seniors accounted for all 14 of those points. If one were to draw up how CU's depth and experience would reap dividends in 2016-17, the Texas game was it.

Three months later, that encouraging night against what proved to be an overrated Texas squad has become the exception rather than the rule for the Buffs. Thursday's loss against Utah dropped the Buffs to 16-13 overall and just 6-10 in the Pac-12 Conference with two regular season games remaining. A team that was expecting to make its fifth NCAA tourney appearance in six seasons still has to prove it is worthy of an NIT berth.

"When you think big picture, and you think expectations, you think this is a disappointing season. I get that," said Boyle before his team's loss against the Utes. "The record is disappointing, but we're not that far off. If we get a box out at Arizona State, and we get two stops at the Washington schools, we (have 19 wins) with the last three at home and we're an NCAA Tournament team and they're not underachieving. They're having a good year.

"And it's three possessions. That's the fine line with what we're dealing with. I know the record is what the record is. I'm not trying to talk myself out of that. That's just the reality. That's what college basketball is."

So what went wrong for the Buffs? Here's a look at five shortcomings that soured the season.

For 15 of the first 16 games of the season, CU utilized a starting lineup boasting four fifth-year seniors (Fortune, Derrick White, Xavier Johnson, and Wesley Gordon) and a fourth-year junior in George King. Such experience typically is a luxury in college basketball.

However, due to redshirt seasons, injuries, and transfer seasons, that quintet entered the season having shared very little meaningful playing time together. White, a one-year transfer from UCCS, was making his Division I debut. Johnson spent last season recovering from a torn Achilles and had never hit the floor with White, Fortune, or the post-redshirt version of King. Boyle warned of his team's lack of cohesion during the preseason. The Buffs never really got ahead of that curve.

"You hear five fifth-year seniors and you think they've played together their whole college careers," White said. "We all came in at different times, so that's a little different. It takes some time for everybody to get used to playing with each other, getting used to the rotation. It helped that we all played a lot of pickup games in the summer, but for any team I think you're going to have that feeling-out process."

Late Thursday night, after the Buffs' loss against Utah, Boyle again referred to his team's inconsistency as its "Achilles heel." He's right. While defense again has victimized the Buffs lately — their past two opponents have shot a combined .566 — they previously had been on a solid run defensively. For CU, every game has exposed a different weakness. When the defense is solid, the offense is stagnant. When turnovers are minimized, the Buffs get outrebounded. The Buffs have been unable to establish any one aspect as a team strength, and even a few expected offensive backbones have been lagging. CU led the Pac-12 in overall 3-point percentage (.389) and free throw percentage (.734) last year. Even while adding White to most of that same group, those numbers have dropped to .348 and .700, respectively.

Boyle absolutely is correct when he notes the Buffs are a few possessions from four more wins, which would equate to a reversal of CU's 6-10 mark in the Pac-12. A rebound at Arizona State, late stops at the Washington schools and at home against USC, and right now the Buffs would be playing for seeding position.

However, experienced teams are supposed to make those plays at crunch time. Even two wins among those four games might have changed the complexion of the season. Coupled with nights CU didn't bring its best competitive spirit — Colorado State, at Utah — and the result is the need to make a statement just to reach the NIT.

Also after Thursday's game, Boyle expressed frustration at a sequence late in the second half when the Buffs, trailing by eight but trying to rally, allowed Utah's Jayce Johnson loose for an easy dunk instead of fouling the 40 percent free throw shooter. Such lapses in basketball acumen also have been glaring for an experienced roster.

At Washington, after a rebound basket by Johnson gave the Buffs a one-point lead with 32 seconds left, CU failed to get its zone defense set up in time to prevent a wide-open, go-ahead 3-pointer by the Huskies' David Crisp. At Washington State they allowed the Cougars' Charles Callison enough wide-open jumpers for him to drop 30 points, despite having scored four points in WSU's previous three games combined. At Arizona State, Johnson's emotions got the best of him at the end of a first half in which he was 6-for-7, earning an admittedly questionable ejection that nonetheless robbed CU of a valuable contributor in a key road game.

Too often, poor decisions at the most inopportune moments have doomed the Buffs.

Boyle remains steadfast in his belief the suspensions that have hit his team this season — two games apiece (and simultaneously) for Gordon and Johnson, 4.5 and counting for freshman Bryce Peters — remain more indicative of poor individual decisions than the sort of systematic breakdown that marked the 16-18 team of two seasons ago. Still, as the Buffs prepare for their 30th game of the season, Boyle still refers to his team's periodic lack of concentration and effort. Those are matters players need to buy into from the top down. If not, the result is inconsistency and breakdowns when the pressure intensifies.

"A lot of times when you think about leadership, it's either you have it or don't have it. I don't think it's always that black and white," Boyle said. "There's times we've had it. That night in Brooklyn was a good one. We had it. The road trip to Stanford and Cal, we didn't have it. It's come and it's gone. It hasn't been there on a consistent basis."