The 2017 NFL Scouting Combine is almost here, with the first group of prospects arriving in Indianapolis on Tuesday. Scouts have long been studying this draft class, and this event provides the opportunity to compare everyone -- all 330 players, to be exact... 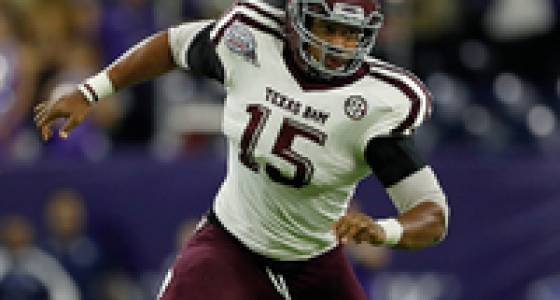 The 2017 NFL Scouting Combine is almost here, with the first group of prospects arriving in Indianapolis on Tuesday. Scouts have long been studying this draft class, and this event provides the opportunity to compare everyone -- all 330 players, to be exact -- under the same roof.

Last week, I took a look at prospects who could challenge Chris Johnson's record in the 40-yard dash (4.24 seconds). Today, I've come up with five guys who should stand out the most and help themselves with strong overall showings in Indy.

Garrett is the top player on my top-50 list and he's the overwhelming favorite to be the first player selected in the 2017 NFL Draft. He has some "wow" plays on tape, and he's going to put on a show at the combine. He's going to weigh between 265-270 pounds, run the 40 in the mid-4.5s and vertical jump around 40 inches. That's what scouts were told when they visited Texas A&M during the fall. That would officially qualify him as an athletic freak.

Williams is a rangy safety prospect with outstanding ball skills and production. He's also an extremely explosive athlete. He should run the 40 in the low 4.4s, post a vertical of 40-plus inches and broad jump at or beyond 11 feet. He was an outstanding high school basketball player and earned the nickname of "little Magic" from his teammates. That athleticism will be on display in the field workout and I expect his stock to soar with NFL evaluators.

Melifonwu is one of the bigger safety prospects I've ever evaluated. At the Reese's Senior Bowl last month, he measured 6-foot-4 and weighed 219 pounds. For such a big man, I was blown away at how well he moved during the 1-on-1 drills with the wide receivers. I reached out to several scouts around the league to get a few suggestions for this article and his name repeatedly came up. When I asked what to expect in his workout, I was told it would be on par with another former UConn defensive back, Byron Jones. If he can match Jones' showing, he should put on quite a performance.

Ohio State has produced a ton of NFL talent over the last few years. Last year's class featured guys like Ezekiel Elliott, Joey Bosa and Michael Thomas. This year's group features two of my top five players -- Malik Hooker and Marshon Lattimore. However, when you study Ohio State tape over the last two seasons, Samuel is the one who appears to be the most explosive. When he gets some space, he can fly. Scouts have been told to expect him to run the 40 in the high 4.3s or low 4.4s, post a vertical close to 40 inches and broad jump at least 10 feet, 6 inches.

McKinley is one of the top pass rushers in this draft class and his main asset is his explosive first step. He has a track background, having run a 10.6-second 100 meters while in high school. Scouts were told he ran that time while weighing between 230-240 pounds. He played the 2016 season around 252 pounds and he's maintained his speed. He should run the 40 in the low 4.5s and he will also impress with his strength testing. Despite having a shoulder injury that will reportedly require surgery, he recently tweeted out a video displaying his prowess on the bench press. He's sure to generate some buzz with his workout in Indianapolis.