DETROIT -- The women's gymnastics coach at Michigan State University suddenly announced her retirement Tuesday, a day after she was suspended for what her boss described as her "passionate defense" of a sports doctor accused of sexually abusing female... 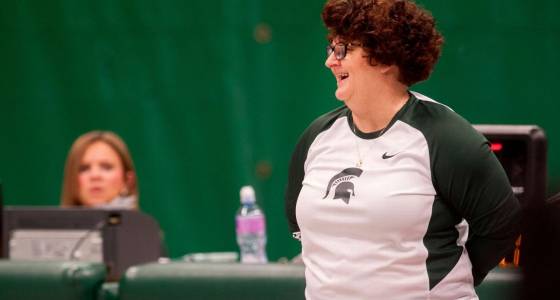 DETROIT -- The women's gymnastics coach at Michigan State University suddenly announced her retirement Tuesday, a day after she was suspended for what her boss described as her "passionate defense" of a sports doctor accused of sexually abusing female athletes for years.

Kathie Klages has also been mentioned in lawsuits by two women who claim she brushed off their complaints of abuse by Dr. Larry Nassar in the late 1990s.

Klages is "extremely distressed" by the allegations and would never do anything to put athletes in "harm's way," her attorney, Shirlee Bobryk, said in a statement.

"Out of respect to the university and the gymnastics program in particular, Ms. Klages believes it is in everyone's best interests for her to retire from her current position at MSU," Bobryk said.

It's one of the biggest developments on campus since Nassar was fired by Michigan State in September and more than two dozen women and girls filed lawsuits against him. In two separate criminal cases, he's charged with sexually abusing a girl at his Lansing-area home and possessing child pornography.

Nassar has pleaded not guilty and denied the assault allegations by female athletes in Michigan and elsewhere. He was also a longtime doctor with Indianapolis-based USA Gymnastics, which trains Olympians.

Klages' suspension after 27 years as gymnastics coach was announced Monday without any elaboration from Michigan State. But the school shed more light Tuesday in a letter written by athletic director Mark Hollis, who acknowledged her retirement.

Hollis explained to Klages that she was suspended because of what he had learned about her Sept. 12 meeting with her gymnasts.

"You shared with the team your highly emotional sense of shock regarding the allegations against Dr. Nassar. That resulted in several student-athletes leaving the meeting feeling that they had received mixed messages," Hollis wrote.

"Others felt confused about who they could or should speak with about the situation. While I acknowledge you provided student-athletes with information about reporting to the Office of Institutional Equity, your passionate defense of Dr. Nassar created an emotionally charged environment for the team," Hollis said.

Earlier, Bobryk said Klages will cooperate fully in any police investigation of Nassar or lawsuits against him.

"Dr. Nassar was trusted by Ms. Klages to competently and ethically treat her team members. Had she ever received any information to cast doubt on the appropriateness of that trust in Dr. Nassar, she would have reacted immediately to protect her gymnasts," Bobryk said.