TEMPE, Ariz. – Keynan Middleton ought to be Exhibit A for every struggling prospect whose career seems to be going nowhere.A year ago, he was a tall, skinny starting pitcher in minor league camp, with one pitch and not much else going for him. Jim Gott,... 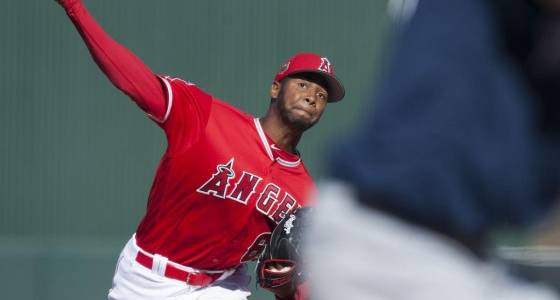 TEMPE, Ariz. – Keynan Middleton ought to be Exhibit A for every struggling prospect whose career seems to be going nowhere.

A year ago, he was a tall, skinny starting pitcher in minor league camp, with one pitch and not much else going for him. Jim Gott, the Angels’ minor league pitching coordinator, said Middleton, a kid from Oregon, was “really raw, like one of our Dominican kids.”

Today, Middleton is in big league camp, on the 40-man roster. Thanks to a newly discovered 100 mph fastball, Middleton is one of the most intriguing prospects in the Angels system.

It’s big talk about a player who 12 months ago didn’t get a chance to pitch so much as an inning in a big league exhibition game, let alone an invitation to camp.

Middleton said: “I didn’t deserve it.”

“I’m not the same person at all,” Middleton said.

What happened to the guy who had just posted ERAs of 6.45 and 5.30 in consecutive minor league seasons?

The transformation began last spring, when the Angels decided to abandon hope of Middleton being a starter. They had picked him in the third round of the 2013 draft based more on his athleticism than his performance.

He had a 90-93 mph fastball and little command of a slider or changeup. Gott said Middleton also was somewhat resistant to coaching, and didn’t understand how to be in baseball shape.

“He tried to do it his way in the beginning,” Gott said. “I know how it is. I did it myself (coming up in the minors). ‘I know better and I know how to do this.’ After you get beaten up a little bit, you start listening a little more. I think Keynan was able to open his mind to the great pitching coaches we have.”

The move to the bullpen suited him immediately.

“As a starter I would go through three innings and be good, and then in the fourth and fifth I’d blow up,” he said. “Now I don’t get to that point.”

Middleton said he also benefited from less practice, ironically. As a starter, there are plenty of drills and side sessions in the four days between starts. Normally, that is when pitchers develop. Middleton, however, said he was using up too much of his energy on that, and didn’t have as much left in the game. Relievers, who need to be ready to be used more frequently, save most of their bullets for games.

And Middleton proved to have plenty of firepower. His velocity kept ticking up with his relief outings.

At the same time, Sergio Rojas, the Angels’ minor league strength coach, had been encouraging Middleton to do more in the weight room and eat better.

“I’m not really a guy that’s sold on the weight room, but he pushed me and it got me better,” Middleton said. “I was just eating everything I saw and working in the weight room.”

That helped Middleton, who is 6 feet 2, go from about 180 pounds last spring to his current weight of about 215.

And the fastball got faster until the day when he saw the magic number: 100.

“It’s an elite group to be part of,” Middleton said. “It makes you feel special. It definitely gives you something to go out and work harder for. I see guys going out there and throwing over 100, and now that’s my goal.”

Although Middleton has cracked triple-digits, Gott said he usually is around 96-98 mph. He was around 94 mph in his first Cactus League game Sunday.

The final pieces of Middleton’s metamorphosis came last season when he also learned new grips for his slider and changeup, making them useful pitches.

“I’m just as in love with my slider as my fastball,” Middleton said, “and that’s never been the case.”

The slider is more advanced than the changeup so far, Gott said. If he does nothing more than throw sharp sliders and 97 mph fastballs, with some command, he can pitch in the majors. A little more improvement with his changeup could put him over the top.

The added velocity, extra pitches, and all-out effort as a reliever helped Middleton finally begin to make progress through the system in 2016. After three months at Class-A Inland Empire, with a 3.72 ERA and 13.9 strikeouts per nine innings, he was moved to Double-A. He had a 1.20 ERA and 18 strikeouts in 15 innings at Arkansas. After a month there, he was promoted to Triple-A, and he had a 4.91 ERA in 14 2/3 innings.

Now, he is something of a longshot to make the opening day roster, but it’s not out of the question. And it seems likely he’ll be in the majors sometime this year.

“At first I was consumed with making the opening day roster and doing all this stuff,” Middleton said. “Now I’m just going to play baseball and put pressure on them to have to make me go back to Triple-A. I’m going to make it hard on them. That’s my only job this spring.”