His Airness is officially open for business.The Bulls and Blackhawks held a joint ribbon-cutting ceremony Wednesday to celebrate the opening of the United Center's East addition, which includes a new atrium with the Michael Jordan statue as the centerpiece.... 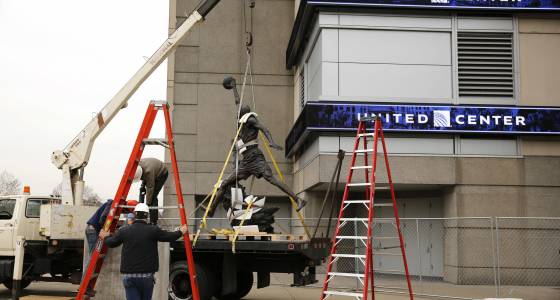 His Airness is officially open for business.

The Bulls and Blackhawks held a joint ribbon-cutting ceremony Wednesday to celebrate the opening of the United Center's East addition, which includes a new atrium with the Michael Jordan statue as the centerpiece.

The statue of the Bulls legend is a draw for fans and tourists and had been unavailable for viewing during the final stages of the addition, which also includes relocated office space for Bulls and Hawks personnel.

The atrium will be open throughout the year and will allow fans a new public gathering space before, during and after events. In addition, modern will-call window facilities will allow fans to obtain their tickets away from the elements and enter the arena directly from the atrium.

The Jordan statue sits in the middle of the new, covered atrium not far from where it was previously located outside of Gate 4 and was exposed to the elements. It is surrounded by a silver railing and glass to keep visitors from getting too close.