Mets' Tim Tebow on his time with the Jets: 'Weren't really many' highs

PORT ST. LUCIE, Fla. -- Tim Tebow is no stranger to the New York media market. So he should have been more prepared when he was asked about his ill-fated stint with the Jets on Monday at First Data Field, during his first press conference of the... 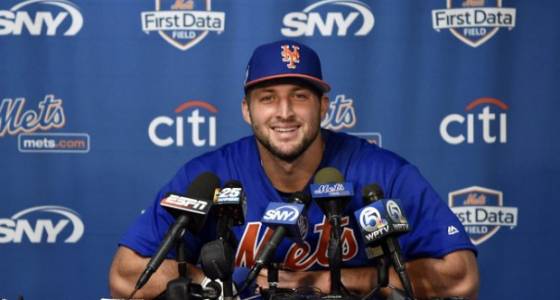 So he should have been more prepared when he was asked about his ill-fated stint with the Jets on Monday at First Data Field, during his first press conference of the year with his new New York team, the Mets.

"Do you think you got a fair shake with the Jets?" a reporter from the New York Post asked.

It clearly caught him off guard.

"Where did that come from?" Tebow asked, laughing.

It was a curveball. And as we all know, Tebow hasn't learned to hit the off-speed offerings yet.

What does Collins think of Tebow?

"The situation with the Jets, I learned so much from it," Tebow said. "And I'm grateful for it. From the highs there -- which weren't really many -- and for a lot of the lows. That was not necessarily the most fun situation. But there were so many things that I learned and I tried to learn and improve myself and the way I handle things."

Tebow was traded to the Jets on March 21, 2012, after the Denver Broncos signed Peyton Manning as a free agent. They didn't really know how to use him and ended up releasing him the following April.

It was a media spectacle, as it always is with him. It's exactly what he's trying not to be but really, still is, in Mets camp at the moment.

Tebow is at spring training on a minor league contract, after signing a deal with the Mets that inlcuded a $100,000 signing bonus on Sept. 8, 2016. He hit just .194 with 20 strikeouts in the Arizona Fall League bringing him over to the major league side after he's had enough at-bats.

Much like he was in football, he's been ripped by many major scouting analysts and even told to quit on a few occasions. Those lessons he learned with the Jets may help him as he embarks on this athletic endeavor with another New York team.

"I think that everything happens for a reason," Tebow said. "That situation happened for a reason. I learned so much from that and I'm grateful for it. I can honestly say that."