PORT ST. LUCIE, Fla. -- The Mets' bullpen imploded and Tom Gorzelanny's tryout didn't quite go as planned, but the real story of the 5-2 Grapefruit League loss to the Houston Astros on Monday was the appearance of closer Jeurys Familia. ... 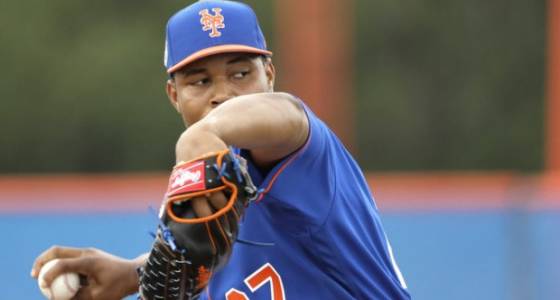 PORT ST. LUCIE, Fla. -- The Mets' bullpen imploded and Tom Gorzelanny's tryout didn't quite go as planned, but the real story of the 5-2 Grapefruit League loss to the Houston Astros on Monday was the appearance of closer Jeurys Familia.

Familia is preparing to pitch for Team Dominican Republic in the World Baseball Classic. But after that? He doesn't quite know when he'll be back on the mound, as he's still waiting for MLB to issue a suspension for his domestic violence case.

Familia pitched the third inning on Monday at First Data Field, getting into the game earlier than usual to be able to face quality hitters. He gave up three hits and one earned run -- an RBI single to Jose Altuve.

Tebow reflects on time with Jets

Conlon: The Mets' 2016 minor league pitcher of the year, left-hander P.J. Conlon, made his Grapefruit League debut and went two scoreless innings. It was the first appearance in a major league spring training game for the 23-year-old non-roster invitee.

Gorzelanny: Another non-roster invitee, left-hander Tom Gorzelanny, had an outing he'd probably like to do over. He faced five straight batters without getting an out, giving up the game-tying run and three more, before finally getting an inning-ending double play. Gorzelanny is in camp on a minor league contract and vying for one of two left-handed jobs open in the Mets' bullpen.

Venezuela: Wilmer Flores and Asdrubal Cabrera each homered for the Mets. Flores' home run was particularly important, as it came off of right-hander Michael Feliz.

What's next: Seth Lugo will make his second spring training start on Tuesday when the Mets travel to play the Miami Marlins in Jupiter, Fla.