Mets are ready for the David Wright worst

PORT ST. LUCIE — David Wright now has a name for the problem threatening his latest comeback attempt, only further clouding an already murky baseball future.In what could be the final gut-punch that forces the Mets captain into retirement, Wright was shut... 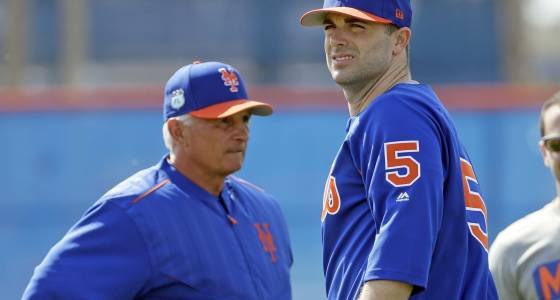 In what could be the final gut-punch that forces the Mets captain into retirement, Wright was shut down from his throwing program Tuesday after tests revealed an “impingement” in his right shoulder, according to general manager Sandy Alderson.

Mets officials took a cautious tone in their public comments, but it’s clear team brass is prepared for the possibility Wright has played his last regular-season game for the Mets.

The 34-year-old Wright, who missed most of last season after undergoing surgery for a herniated disk in his neck — and continues to manage debilitating spinal stenosis — has been told he can continue taking at-bats at designated hitter in the Grapefruit League. But he won’t be allowed to throw for at least two weeks, and then will need an extended period to build up his arm strength to make the throws required by a major league player.

“There is no structural damage, this is not a surgical issue,” Alderson said. “This is just a matter of having to shut him down for a couple of weeks from throwing to make sure that we get that shoulder strengthened and stabilized.”

What Mets will miss as David Wright's sad reality hits 0:0 JUPITER, Fla. — There is sadness, but no surprise. The...

Wright started playing catch in the last 10 days — his first throwing since last June — but had soreness in his shoulder from the start, according to Alderson.

The Mets will proceed with Jose Reyes as the starting third baseman. Reyes became the starter at the position in the second half of last season after arriving on a minor league contract following Wright’s surgery. The Mets also have further potential options at third base in Wilmer Flores and T.J. Rivera, among others.

“Sandy put this team together for reasons such as this: That if something happens, we’ve got a backup in place, and before we leave camp all of a sudden we need that,” Terry Collins said.

“It’s a pretty big setback for [Wright] because he’s worked so hard to get into camp and actually is swinging the bat pretty good to be pushed back. We’ll just see when his arm gets better.”

Reyes expressed a sense of disappointment for his longtime friend.

“He can’t throw right now,” Reyes said. “But his body looked great, his swing looked good. He needs to take his time and raise that shoulder and when he feels good start throwing.”

Collins said a discouraged Wright recently told him he “might need to get a first baseman’s glove.” But Alderson discounted the possibility Wright could be shifted to first base in his present condition.

“If he can’t throw, it makes every position less realistic,” Alderson said. “We need to wait and see if this shoulder issue continues. Our goal is to get him back to third base.”

Wright is only halfway through an eight-year contract worth $138 million he signed following the 2012 season. With Wright on the disabled list for extended periods the last two seasons, the Mets have been in position to collect from the insurance on that contract. In addition to his absence last year, Wright missed most of 2015 rehabbing from spinal stenosis.

Now, Alderson and team owners Fred Wilpon, Jeff Wilpon and Saul Katz must walk a fine line in giving latitude to a popular player in his attempt to return and perhaps nudging him toward retirement.

Alderson was asked if he’s concerned Wright’s career might be over.

“I don’t think we’re at the point where that concern is at a more heightened level,” Alderson said. “This is all part of the process of rehabilitating, and it’s taking longer than I am sure David would have hoped, and we would hope, but that is part of the process.”