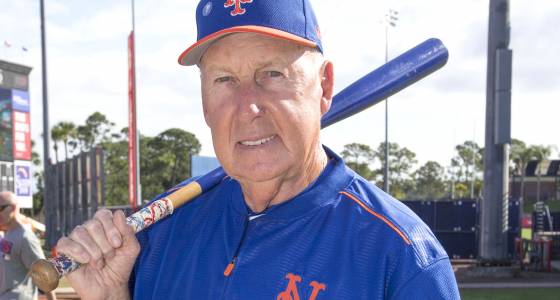 There is roving Mets minor league pitching instructor Phil Regan throwing batting practice on the back fields of the club’s spring training complex.

Just another day livin’ the dream. Regan has April 6 circled on his calendar. That day he wants to makes sure he throws batting practice for the St. Lucie Mets — that is his birthday.

Phil Raymond Regan will turn 80, and he still can bring it.

“It’s kind of amazing, I don’t feel like I’m 80, but it’s true,’’ Regan told The Post. “You know, time goes so fast. If you keep moving, you’re OK. I’m not sure a lot of guys at 80 are throwing batting practice, that’s another thing to check off my bucket list.’’

He may go golfing that day, too. A humble man, after much prodding, he admitted he can shoot his age on a good day.

Regan, who is in his ninth year with the Mets organization, first signed with the Tigers in 1956, out of Western Michigan University as a 19-year-old. Sixty years ago he was pitching for the Durham Bulls. Imagine that.

The 6-foot-3, 200-pounder is a living, breathing version of Baseball-Reference.com.

Here are some highlights from his baseball bucket list life.

The right-hander pitched 13 years in the majors, compiling a 96-81 record with 92 saves. Regan was teammates with Hall of Famer Sandy Koufax in 1966 with the Dodgers, a rotation that included three Hall of Famers: Koufax, Don Drysdale and Don Sutton.

Koufax, who won 27 games that year, gave the reliever one of the great baseball nicknames: “The Vulture.”

“He came in the clubhouse and said, ‘Regan, you are a real vulture. Give me my win,’ and some reporter heard it, and that’s the way it started.

“Sandy was the best pitcher I’ve ever seen. He could have been a 30-game winner his last year, but I vultured a few wins.’’

Regan said you can add a game to Ripken’s iron-man streak.

“I remember after a game in Detroit, he and a bunch of the guys just stayed after the game and played a game,’’ Regan said. “Cal was such a joy. In every way, after a game, in different ballparks, they’d bring so much stuff down and he would sign every one. When he broke that record and took that lap around Camden Yards, I have to say, I had tears in my eyes.’’

Ted Williams was Regan’s hero, and he got to pitch to the Splendid Splinter one time, Aug. 6, 1960.

“I can attest to his book where he said what he would hit, .240, if he swung at that low and away pitch,’’ said Regan, a sinkerballer pitcher. “I threw him six pitches low and away: strike, ball, ball, strike, ball … ball. The catcher said, ‘Phil, that last one was a strike, but not on Ted Williams.’ He never swung at one pitch. He was so disciplined.’’

In 1969 Regan was with the Cubs, the team the Miracle Mets beat after the famous black-cat incident — when a black cat ran onto the field at Shea Stadium in front of the Cubs dugout as they were batting. The Cubs collapsed.

Regan adds to the story. Regan was good friends with Jim Hickman, a former Met who hit 21 home runs for the Cubs in 1969. Hickman died last June, and Regan went to his funeral in Henning, Tenn.

“Jim and I had roomed together for six years,’’ Regan said. “All ‘Hick’ ever talked about was Henning, and growing up his dad had this big pecan tree at the house. His dad made $800 selling pecans one year. A friend of his offered to give me a tour, so I said, ‘I’d like to see that tree.’

“As we drove up, what do you think was running under that tree? A black cat. Then the friend wanted to show me the courthouse one of the first buildings built in Henning. So we drive by the courthouse and sitting on the steps was a black cat. Amazing.’’

Now that the Cubs have won a World Series for the first time since 1908, those Henning black cats can rest.

Regan was the pitching coach for the Mariners when Roger Clemens set a major league record, striking out 20 Mariners on April 29, 1986, at Fenway Park. Twelve years later, he was the Cubs pitching coach when Kerry Wood matched that feat at Wrigley Field against the Astros, May 6, 1998.

“Amazing to see both of those performances — one an AL record, the other an NL record,’’ Regan said.

“It was kind of interesting to me because I pitched against Roger in 1961 when he broke Babe Ruth’s record,’’ Regan said, “and then to see McGwire break Maris’ record quite a few years later, was something to see.’’

Regan had gotten tickets for an old friend from Michigan that day and after the game someone said to his friend, “ ‘I’ll give you $50 for that ticket?’ My friend said, ‘But the game is over?’ ’’ Regan recalled. “My friend took the money.’’

When Team USA won the Gold Medal in the 2000 Olympics in Sydney, Regan was the pitching coach.

“I had retired in 1999 from Cleveland as the pitching coach, and then I got a call from Major League Baseball and they said Tommy Lasorda was the manager,’’ Regan said. “So we went to Australia, and I have to say it was one of the great experiences of my life. I’ve been in a World Series. I’ve pitched in a World Series, but I think this was even a bigger thrill. You’re playing for your country. That was a standout time.’’

Regan also was a college coach at Grand Valley State in Michigan from 1973-82, after retiring as a player before being hired by the Mariners.

During his pitching career, he once had 14 illegal pitches called against him by umpire Chris Pelekoudas.

“They thought I was doctoring the ball because of the rotation of the ball,’’ Regan said. Regan never was found to be doing anything illegal with the baseball.

He played for legendary managers Walt Alston and Leo Durocher, and had phenomenal teammates like Hall of Famer Al Kaline.

“Al and I lockered next to each other for five years,’’ Regan said. “There’s always moments that spurred you on as a player. He told me a story. He was a bonus baby who had to spend two years in Detroit.

He was only 18, kind of a skinny kid and an old pitching coach by the name of Ted Lyons was throwing batting practice, and he said when Kaline was up, ‘This guy can’t even pull me. I don’t know how we gave him all that money.’

“That hurt Al so bad he told me, ‘I went home, filled this big boxing bag with sand and I swung a weighted bat against that 100 times in my basement. Every day.’ He said, ‘I came back the next year and I pulled everything.’ ’’

A Hall of Fame career was born.

“We just went home, you get nothing,’’ Regan said.

In 1966 the Dodgers were in Shibe Park in Philadelphia and won the final game of the season to send them to the World Series. As Regan was running from the bullpen to the dugout, some fan grabbed his Dodgers cap.

Twenty-nine years later Regan got a letter in a box one day, and inside the box was his Dodgers cap. The fan apologized for stealing it and sent the cap back to Regan. He invited the fan to a game in Baltimore, a coming-home baseball moment.

“I still have the hat today,’’ Regan said proudly.

Not all wonderful memories are about record-breaking moments. Phil Regan’s career is one for the aged and the ages.