Galleries Videos CONTACT ADVERTISE
Girne 13°
few clouds
BUSINESS EDUCATION ENTERTAINMENT HEALTH POLITICS SCIENCE SPORTS TECHNOLOGY
08:11 Stick it to “The Man” at the Zero Trust Security Summit
04:37 What to Consider When Starting Your Own Business
10:17 Clover POS System for Dental Offices
06:14 How Mobile Technology is Revolutionizing the World of Poker
20:31 The Importance of Banks in Our Lives
05:46 Things to Consider When Hiring a Criminal Defense Lawyer
09:15 Couple T-shirts are ideal for spicing up relationships
09:01 Laser Tattoo Removal and Its Amazing Benefits
07:58 Consolidate your medical bills with a debt consolidation
19:48 Is your mind a certain people? Elina Tanskanen gives a task, which you...
BIST
121952
GOLD
296.115
USD
5.9236
GPB
7.7099
EUR
6.5717
Breaking News
Why Go for Physical Therapy and How to Find the Best Therapist
Close

Monaco: Teenage sensation Kylian Mbappe scored again to set Monaco on their way to a 3-1 second-leg victory over Borussia Dortmund on Wednesday that allowed them to win their Champions League quarter-final 6-3 on aggregate.Radamel Falcao also netted for the... 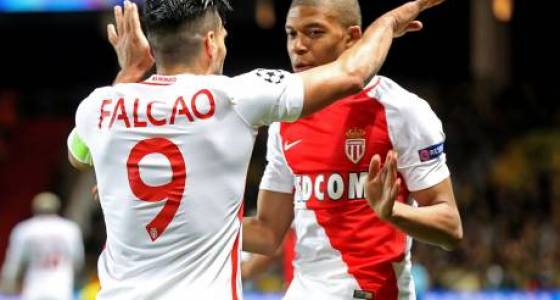 Monaco: Teenage sensation Kylian Mbappe scored again to set Monaco on their way to a 3-1 second-leg victory over Borussia Dortmund on Wednesday that allowed them to win their Champions League quarter-final 6-3 on aggregate.

Radamel Falcao also netted for the home side in a whirlwind start at the Stade Louis II, and Dortmund were left with too much to do to save the tie.

Their skipper Marco Reus pulled a goal back early in the second half but Valere Germain came off the bench to put the seal on a famous win for a brilliant young Monaco side, who go through to the last four for the first time since 2004.

“We are very pleased to have taken Monaco to the semi-finals. It is very important for French clubs and France,” Falcao told beIN Sports.

“Right from the start we pressed high and scoring early on served us well.”

Meanwhile, Dortmund bow out after a tie overshadowed by the bomb attack on the team’s bus last week that forced the first leg to be postponed by a day.

The Germans lost that match 3-2, their minds elsewhere, but their hopes of turning the tie around in the second leg were not helped when their bus was held up on the way to the Stade Louis II, leading to a five-minute delay to the kick-off.

UEFA blamed “heavy traffic” for the hold-up but, on their official Twitter account, Dortmund said they had been delayed in leaving their hotel by police for around 20 minutes “without justification”.

“It was the worst thing that could happen a week after the attack — everyone was on the bus ready to go but we were not allowed to,” Tuchel said.

“You come into such a game trying to have a clear mind to go out and turn the tie around, but with just an hour and a quarter to go before the match we were not able to think about football at all and it wasn’t ideal.”

While the appearance of Spanish defender Marc Bartra — who needed surgery for a broken wrist suffered in last week’s attack — at the stadium was a boost to Dortmund, the delay unsettled Thomas Tuchel’s side and their hopes were effectively ended in a terrible opening 20 minutes.

The away defence backed off as Benjamin Mendy advanced and when the full-back’s powerful left-foot strike stung the palms of goalkeeper Roman Burki, the 18-year-old Mbappe was on hand to convert the rebound.

That strike meant Mbappe, who netted twice in the first leg, became the youngest player ever to reach five goals in the Champions League, beating Real Madrid great Raul by 41 days.

Nuri Sahin cracked a free-kick off a post at the other end and Monaco survived that scare to increase their lead on 17 minutes at the end of a counter-attack.

The rampaging Mendy’s initial cross came back to Thomas Lemar and he held up a ball that was headed home by captain Falcao, the prolific Colombian marking his 50th appearance in European competition with his 45th goal.

Like in the first leg, Tuchel’s decision to start with three at the back had backfired and he changed things up before the half-hour mark, bringing on Ousmane Dembele for Erik Durm and reverting to a four-man defence.

Dortmund now needed to score three times without reply just to force extra time but they did not manage to get one back until three minutes after the restart, Dembele tormenting Mendy on the right before his cutback was lashed home first-time by Reus.

But it was Monaco who had the best chances to score again after that, with Burki tipping over Almamy Toure’s looping header and Falcao squandering a fine chance before substitute Germain made sure of their place in the last four.

He had only just come on for Mbappe when he converted Lemar’s square ball with his first touch with nine minutes to go, as Monaco join Real Madrid, Atletico Madrid and Juventus in the semi-final draw.