Mayweather-McGregor Fight: Will The Fight Ever Happen? A Look At How Much Money Is On The Line For The Boxing And UFC Stars

Some have called it a publicity stunt by two renowned fighters from two different sports. But most agree they want to see retired and undefeated middle and welterweight champion boxer Floyd Mayweather and former UFC lightweight titleholder Conor McGregor... 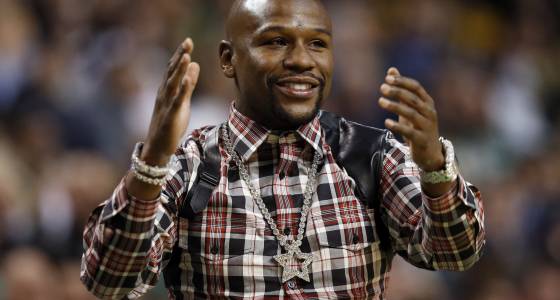 Some have called it a publicity stunt by two renowned fighters from two different sports. But most agree they want to see retired and undefeated middle and welterweight champion boxer Floyd Mayweather and former UFC lightweight titleholder Conor McGregor step into the ring, the octagon or really anywhere as long as they can watch the action unfold.

So far, rumors, innuendo and even confirmations have come from both loquacious fighters’ camps, with one report last week from ESPN’s Stephen A. Smith stating Mayweather told him directly that “we’re getting very, very close” to locking down the much-anticipated bout.

“We’re in a different era now,” Roach said. “It looks like it’s gonna happen. Everything is pointing in the right direction. I think Conor will have his hands full with a boxer like Floyd. But he’s sellable, he’s making some noise.”

Roach also shared that Mayweather came into his Hollywood gym and said if McGregor asked to be trained for boxing that Roach should take him on.

Roach also said that Mayweather told him: “I am gonna fight him. And we can all make a lot of money.”

Given his nickname and company namesake “The Money Team,” the figures being thrown around for the fight’s purse and its pay-per-view buys potential certainly indicate it could be a cash cow for all involved.

“We tried to make the Conor McGregor fight. They know what my number is,” Mayweather said to  ESPN last month. “My number was a guaranteed $100 million, that was my number. We’re the ‘A’ side and I don’t really know how much money Conor McGregor has made. I’m pretty sure he hasn’t even made $10 million in an MMA bout.

“But we are willing to give him $15 million and then we can talk about splitting the percentage, the back end percentage on pay-per-view. But of course, we’re the ‘A’ side. How can a guy talk about $20 or $30 million if he’s never made $8 or $9 million?”

Mayweather’s price tag, and even his estimation of the Irishman possible payday, makes sense when just glancing at the purses and PPV revenue he’s taken down over the years. Mayweather’s 2015 showdown with Manny Pacquiao shattered previous records by totaling a more than $600 million gross, including $400 million off of a record 4.4 million PPV buys and another $72 million from the live gate.

Considering the marketability of McGregor, a fight with Mayweather could generate $500 million in pay-per-view by some estimates. Tickets sales could also push it to another $50 million in ticket sales.

However, the Mayweather-Pacquiao fight had some advantages that a Mayweather-McGregor one might not. For one, boxing fans waited several years to finally see the Filipino star square off with Mayweather, whereas Mayweather-McGregor has only been built up in the last couple of years. Furthermore, both HBO and Showtime combined their considerable powers to each air the PPV, an occurrence that may be far-fetched for this potential bout since UFC has never used a premium cable network to show its fights.