Add another quarterback to the first-round mix for the 2017 NFL Draft.Texas Tech QB Patrick Mahomes is a prospect on the rise, according to NFL Network draft expert Mike Mayock, and he belongs in the first-round conversation along with the draft's other... 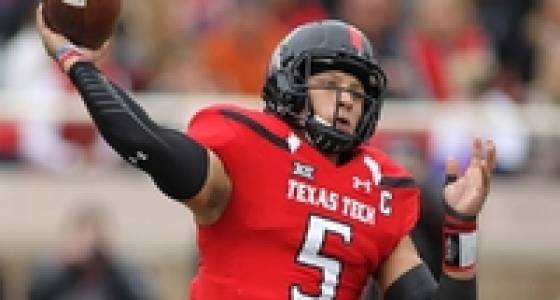 Add another quarterback to the first-round mix for the 2017 NFL Draft.

Texas Tech QB Patrick Mahomes is a prospect on the rise, according to NFL Network draft expert Mike Mayock, and he belongs in the first-round conversation along with the draft's other top quarterbacks.

"He's different. He's a gunslinger, he's got an innate feel for the game," Mayock said. "The more I look at him, the more I push him higher and closer to that first-round conversation with (DeShone) Kizer, (Deshaun) Watson and (Mitch) Trubisky. Mahomes is picking up steam in NFL circles."

The former Red Raiders star entered the draft as an underclassman after two-plus stellar years as a college starter. He threw for career highs of 5,052 yards and 41 touchdowns in Texas Tech's Air Raid offense last year, a spread system that will require a significant adjustment to the pro-style systems of the NFL.

Two weeks ago, Mayock ranked Mahomes the No. 4 quarterback in the draft class.

Mahomes intends to throw at the NFL Scouting Combine later this week, and perform in all other drills except for the bench press. It will be an ideal chance to show NFL coaches and scouts that he's just as good as Kizer, Watson and Trubisky. If he does so, his draft stock will only continue to climb after the combine.

Texas Tech will hold its pro day on March 31.