Mayock: DeShone Kizer could be like Philip Rivers in NFL

DeShone Kizer's potential in the NFL isn't easy to assess after just two seasons as a college starter, particularly when he played more effectively in the first of those. But the former Notre Dame signal-caller's physical tools have drawn a comparison... 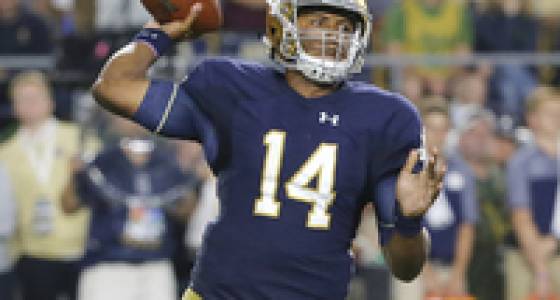 DeShone Kizer's potential in the NFL isn't easy to assess after just two seasons as a college starter, particularly when he played more effectively in the first of those. But the former Notre Dame signal-caller's physical tools have drawn a comparison to one of the NFL's most accomplished passers: Philip Rivers.

"I think he has the most upside (in the QB draft class), the highest ceiling. But he is 12-11 as a starter at Notre Dame. He played a lot of bad football with the game on the line in the fourth quarter this year. That is not acceptable," Mayock told MMQB. "But he is 6-foot-5, 235. He has that kind of prototypical franchise quarterback look, a Philip Rivers type ... if he gets everything right."

For Kizer, getting everything right could mean both ideal development and ideal circumstances with his new team. Mayock doesn't believe any of the top quarterbacks in the 2017 NFL Draft will be ready to take over an NFL offense as a rookie. That would align the Kizer-Rivers comparison even more, as Rivers threw just 30 passes over his first two NFL seasons. Rivers was selected No. 4 overall in the 2004 draft by the New York Giants, then traded to the San Diego Chargers, where he's enjoyed a prolific pro career. Mayock currently ranks Kizer as the top quarterback in the draft.

Later this week, Kizer will get a chance to show NFL clubs his skills at the NFL Scouting Combine in Indianapolis. It's a crucial opportunity for a player who left college as a redshirt sophomore and has been identified as the quarterback with the most to prove there.

If he does have potential resembling Rivers, this week is the time to show it.