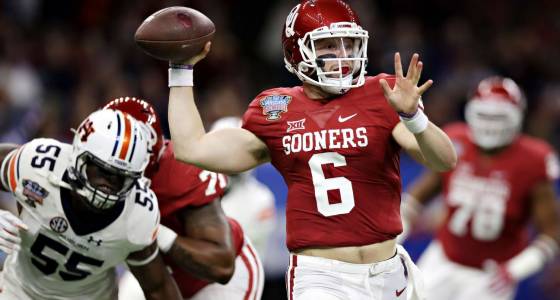 He was charged with public intoxication, disorderly conduct, resisting arrest and fleeing, according to the Washington County (Arkansas) sheriff's office.

According to the preliminary police report obtained by ESPN.com, a police officer was flagged down to take an assault and battery report at about 2:29 a.m. Saturday. The person who flagged the officer was yelling at Mayfield, who told the officer he had been trying to break up an altercation. The officer asked Mayfield to stay so that he could take his statement, at which point Mayfield began "yelling profanities and causing a scene," according to the report.

The report stated Mayfield had slurred speech, had difficulty walking down stairs and was covered in food on the front of his clothing. According to the report, when the officer asked Mayfield to come over, he began to walk away. When the officer told him to stop, Mayfield sprinted away, which forced the officer to chase him and tackle him to the ground.

Mayfield would not place his arms behind his back, despite repeated orders from the officer to do so, according to the report. Eventually, the officer placed him in handcuffs and took him to the Washington County Detention Facility.

The Oklahoma quarterback was booked at 8:21 a.m. local time on the misdemeanor charges. He faces an April 7 court date for the public intoxication charge, according to the sheriff's office.

"We are aware of the matter and are learning the details," the university said in a statement. "We don't have any other information at this time."

Mayfield has finished two straight seasons in the top five of the Heisman voting and broke the FBS season passing efficiency record last year. He announced in December that he would return for his senior season.