TAMPA -- Maybe Luis Severino's role this season isn't certain, after all. After Yankees general manager Brian Cashman this offseason said the talented but frustrating Luis Severino would be a starting pitcher out of spring training no matter if he's... 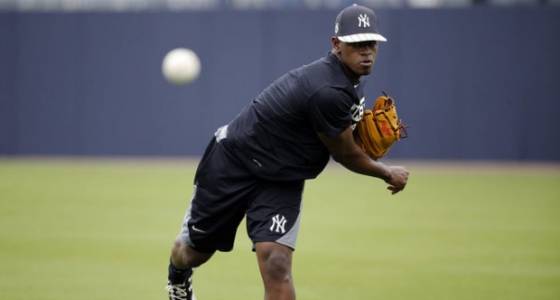 After Yankees general manager Brian Cashman this offseason said the talented but frustrating Luis Severino would be a starting pitcher out of spring training no matter if he's in the bigs or the minors, manager Joe Girardi threw some doubt in there Saturday morning.

"We really haven't talked but I think you have to look at him both ways, too, because he did a good job in that role," Girardi, referencing Severino's work as a reliever last year, said in his office at George M. Steinbrenner Field.

Severino, a 22-year-old righty, dominated out of the bullpen.

Still, Severino -- armed with a fastball that lives in the mid-to-upper 90s, and a curveball and a changeup that are at times devastating or awful -- is too young to give up on as a starting pitcher, Girard said.

"I definitely think so," Girard said. "I think it's too good of an arm. There's too much potential there. To me, it's trying to get him ready."

That doesn't mean that if the Yankees need him in the majors on Opening Day, Girardi will rule out using him behind his trio of talented late-inning relievers: Aroldis Chapman, Dellin Betances and Tyler Clippard.

"He's young," Girardi said. "But there's been a lot of starters that were in the bullpen for a little bit and then became starters. It's just too hard to figure out exactly how it's going to shake down. There are some pretty hard decisions we have to make."

Severino said he worked hard in the offseason, losing 10 pounds and training alongside Hall of Famer and retired Red Sox ace Pedro Martinez. Severino added that his changeup -- which disappeared last season -- is back and feels as good as his slider, which has added depth.

Pitching coach Larry Rothschild has said he's seen improvement in Severino's stuff and control, but added that his optimism would stay cautious until Severino pitches in spring training games.

Severino is slated to start Sunday for the Yankees.