University of Oregon release SAN DIEGO -- Matt Mercer threw seven three-hit innings and freshmen slammed the door over the final two frames as the Oregon baseball team beat Seton Hall 1-0 on Saturday in the Ducks' first of two games on the day... 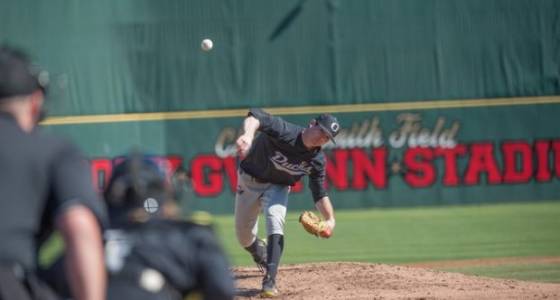 SAN DIEGO -- Matt Mercer threw seven three-hit innings and freshmen slammed the door over the final two frames as the Oregon baseball team beat Seton Hall 1-0 on Saturday in the Ducks' first of two games on the day in the Tony Gwynn Classic.

How It Happened: Mercer (1-1) faced the minimum through six, and used his career-high seventh strikeout to escape a jam in the seventh after allowing two one-out singles. The outing was the longest of Mercer's career, and was necessary on a morning Oregon's bats largely were quiet.

The Ducks (4-2) manufactured a run in the seventh without the benefit of a hit. With one out, freshman catcher Matthew Dyer reached on a two-base throwing error, and Oregon loaded the bases with a walk and a hit batter. Leadoff man Kyle Kasser then worked another walk, driving in what proved to be the only run of the game.

Ryne Nelson pitched a 1-2-3 eighth inning and fellow freshman Kenyon Yovan retired the side in order in the ninth for his second save.

Inside the Box Score: Freshman relievers have combined for eight scoreless innings over Oregon's last three games. ... A.J. Balta doubled with two out in the fourth and Jake Bennett singled and advanced on a walk with two out in the sixth, but each was stranded in scoring position. ... Nelson ended the eighth with a strikeout, and Yovan struck out the first two batters he faced, giving UO pitchers 10 punchouts for the game.

On Deck: The Ducks are back in action later Saturday at San Diego to close out the Tony Gwynn Classic at 6 p.m.