LOS ANGELES >> One of the questions entering Friday’s CIF Southern Section boys basketball Open Division semifinal was, “How much would 7-foot-2 Bol Bol impact the game?”As it turned out, enough.Settling for mostly 3-pointers, second-seeded... 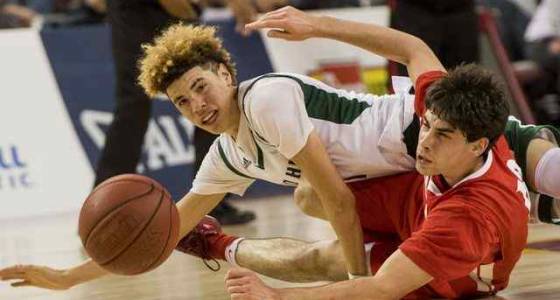 LOS ANGELES >> One of the questions entering Friday’s CIF Southern Section boys basketball Open Division semifinal was, “How much would 7-foot-2 Bol Bol impact the game?”

As it turned out, enough.

Settling for mostly 3-pointers, second-seeded Chino Hills came up short to third-seeded Santa Ana Mater Dei 83-80 in overtime Friday night at Galen Center. Mater Dei (31-1) advanced to play Torrance Bishop Montgomery in the finals next Saturday at Honda Center. Chino Hills dropped to 29-2, but will still be in the state playoffs, where the teams could see each other again.

“I think we weren’t aggressive enough and we didn’t share the basketball,” Chino Hills coach Stephan Gilling said. “We need to do a better job offensively.”

Justice Sueing (team-high 25 points) snapped a 79-79 tie with two free throws with 49.1 seconds left in overtime. It was a play in which LaMelo Ball tried to take the charge, but was instead called for a blocking foul.

Bol, a junior, was not at Mater Dei when the teams met in December in Las Vegas, an 84-73 Chino Hills win.

Chino Hills usually shoots a lot of 3-pointers, but on Friday, the Huskies made 18 of 54 from 3-point range as LaMelo Ball made just 8 of 28 3-pointers (scoring 28 points) and LiAngelo Ball made just 5 of 18 3-pointers and scored 26 points. Mater Dei, meanwhile, was aggressive going to the basket and attempted only 11 3-pointers in the game.

Mater Dei ended regulation with a 6-0 run, tying the score on a Sueing free throw with 1:27 remaining. LaMelo had a 3-point attempt just before the buzzer, but as happened too many times Friday, it didn’t go down.

“I thought at the beginning, we were hyperventilating,” McKnight said.

Elizjah Scott had only four points, but grabbed 21 rebounds to lead all players in that category.

McKnight knows that the excitement over beating Chino Hills might not last long.

“How long can you enjoy it? We might see them again in a couple of weeks,” he said.