One more time, Martin Truex Jr. was being the good guy, he was being the gentleman, the sportsman, the affable runner-up.It has been this way for 52 weeks, and it certainly is not something he has gone looking for, and there is little doubt he would have... 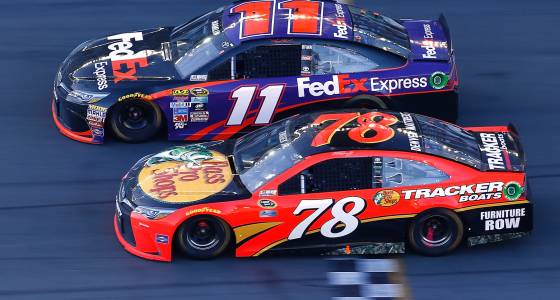 It has been this way for 52 weeks, and it certainly is not something he has gone looking for, and there is little doubt he would have been fine if fate and history had chosen someone else to co-star in this fascinating moment by the finish line of the Daytona International Speedway.

“Honestly,” he said earlier this week, “it really was cool to be a part of history.”

That has been the credo for a year, from the moment that Denny Hamlin literally drag-raced down the final straightaway of the 58th Daytona 500 last Feb. 21. The two men crossed the finish line in a blur, a photo finish, and Hamlin was declared the winner by 0.010. That is one one-hundredth of a second.

How close is that?

Your eye could have blinked just one-third of a time in 0.010. If you held a .22-caliber rifle 12 feet away from me and pulled the trigger, the bullet wouldn’t have time to reach me. A hummingbird could have flapped its wings only one-half of a time. Noah Syndergaard’s best fastball would only be half an arm’s length from the his hand in 0.010.

That’s epic. That’s historic. That also is more than a little tragic, if you’re Martin Truex Jr., who said, “I came as close as anyone has ever come to winning the Dayton 500 without actually winning the Daytona 500.”

Which is about as perfect an answer as you can give.

And is one he has given over and over and over again these past 52 weeks, before Sunday’s return to Daytona. And as you listen to Truex speak, it is hard not to conjure the patron saint of Truex’s plight, another terrific athlete of another time and place who endured a most public shortcoming on a most public stage, and not only lived to tell the tale but thrived in its wake.

I listened to Martin Truex Jr. this week. But I heard Ralph Branca.

“They were saying that Bobby’s home run was such a trauma that I couldn’t go on,” Branca said years after allowing the most famous home run in baseball history, the one Bobby Thomson hit off Branca to win the 1951 National League pennant. “That’s ridiculous. If you play sports, you expect to lose some.”

“That’s exactly right,” Truex said when the quote was repeated to him.

Branca, who died Nov. 23, once told me: “If I had a dollar for every time I’ve seen that damned home run, my children’s children would be sultans. And every time I realize: I wasn’t cursed by that. I was blessed. I was a part of history.”

That quote is related to Truex, too.

“I know something else: I’ll see the highlight of the end of that race forever,” said Truex, who grew up in Stafford Township, N.J. “There’s something important about that.”

Of course, what would really make Truex’s story complete is if he were afforded the kind of closing chapter Branca never was. Branca had been a 21-game winner at age 21, but his career essentially was over by 1954. He never let the famous home run define him, but he was eager to remind people he had been a terrific pitcher at one point.

“One of these days, I want to win this race,” Truex said. “And when that happens maybe it can be a full, complete story. You come so close. And then you make it a few steps farther. I think that’s a pretty good story, too.”

You know what I love? This silly notion that long baseball games alienate “kids.” When I was a kid, I rooted for extra innings when I went to a game. Kids I take to games still do, at least those who actually like baseball. And if they don’t like baseball, guess what? Giving them less of it won’t make them like it more. Or at all. Seems like this is more a subject for grouchy old men than bright-eyed kids.

“Manchester by the Sea” is so good it demands the question: At what point does Casey become the Hank Aaron of the Affleck brothers, and not the Tommie?

I like watching Michael Conforto hit as much as the next guy, I do. But I honestly cannot remember the last player in New York for whom there was such widespread amnesia. It’s as if he didn’t hit .148 with a .519 OPS — with 21 hits and 48 strikeouts — across seven weeks and 157 plate appearances in May and June last year.

Who had the Islanders in the pool of best New York sports story as February handed the baton to March?

Alan Hirschberg: To save a few seconds a year, MLB has eliminated the possibility of seeing the unexpected by eliminating the intentional walk — which is the advantage sports has over other forms of entertainment. Nobody goes to “Hamilton” hoping to see the one performance where Burr loses the duel.

Bruce Welsch: The only thing that can change the culture of the Knicks is for the fans to boycott MSG, and that should start with the No. 1 fan, Mr. Spike Lee to publicly announce he is not renewing his season tickets and encourage all the other celebrities and fans to follow suit.

Vac: Problem is, he still seems to enjoy himself at games like the Spurs win last week. So hard to just walk away from something that still gives you joy.

@callmew1lly: It seems even the commissioner doesn’t realize “pace of play” and “length of games” are two very different things.

@MikeVacc: And that is the most important distinction of all in this argument.

Ron Gambardella: Do you think the Mets head into this season with more question marks then “The Riddler”?

Vac: Have to figure being the Riddler is a significant step higher than being the Joker, right?