NASHVILLE, Tenn. -- Tennessee Titans quarterback Marcus Mariota has parted ways with the scooter that helped him keep weight off his repaired right leg and put on a walking boot, a big step in his recovery from surgery to fix a broken fibula.Following the... 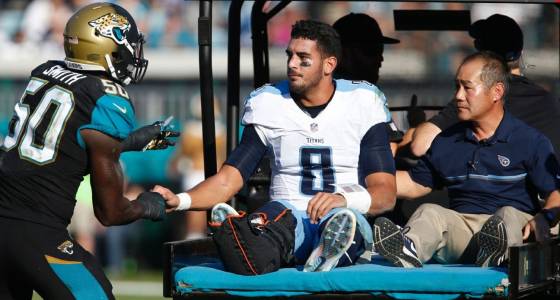 NASHVILLE, Tenn. -- Tennessee Titans quarterback Marcus Mariota has parted ways with the scooter that helped him keep weight off his repaired right leg and put on a walking boot, a big step in his recovery from surgery to fix a broken fibula.

Following the surgery performed by Dr. Robert Andrews in Charlotte on Dec. 28, the Titans said it would be two months before Mariota would be able to put weight on the leg.

Tuesday was the two-month mark, but a source told ESPN.com that Mariota actually moved into the boot last week.

Mariota has not spoken publicly since suffering the injury Dec. 24 in during the Titans' loss to Jacksonville. The Titans were eliminated from playoff contention later that night.

Last week at an event for season ticket holders at the Music City Center, Mariota appeared in a video and thanked fans for their overwhelming report. He was in Oregon at the time and remains there, the source said, but he spent a lot of time in Nashville after surgery and is expected to do the bulk of his rehab here.

Head coach Mike Mularkey said recently that the team expects to be “overcautious” with Mariota and hold him out of summer OTA work. The third-year quarterback should be ready for training camp.

Alex Tanney passed up a spot with the Browns early last season in exchange for a raise to remain on the team’s practice squad. He was elevated to the backup role behind Matt Cassel for the Week 17 win over Houston.

Cassel is set to become a free agent on March 9, and the Titans have not indicated if they wish to re-sign him or go a different direction. With Mariota unavailable over the summer, however, it’s likely Tennessee will want a veteran backup.