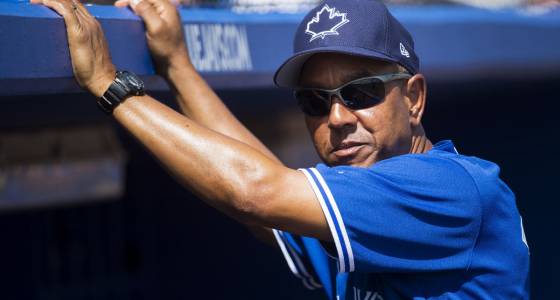 DUNEDIN, FLA.—Maybe it made more sense following the Blue Jays’ first four exhibition games — all losses — to ignore manager John Gibbons and head straight to Bobby Meacham, manager of the Triple-A Buffalo Bisons, for comment. After all, most of the players in all the games will be playing for either Meacham or Double-A New Hampshire skipper Gary Allenson, who was skipper of the Bisons a year ago.

In Monday’s 2-1 loss to the Pirates at Florida Auto Exchange Stadium, the six true Blue Jays, out of 27 men in the game, combined for three hits in 11 at-bats. On the pitching side, Marcus Stroman, Roberto Osuna and Aaron Loup totalled four innings. Stroman is the only member of the five-man rotation to appear in a game.

Once again, it was young non-roster first baseman Rowdy Tellez who impressed the coaches with a double and a walk in two at-bats, plus a stolen base. He played briefly for Meacham in 2016. The manager has nothing but praise.

“Rowdy is a great example of somebody who I look at and go, ‘Man, he really knows how to get better every day.’ ” Meacham said. “He’s on the right track. He’s not like, ‘Man, I’ve got to tell him this or that. I’ve just got to keep working with him and he’ll mature and ripen. I think he’s going to do a fabulous job at the big-league level.”

Meacham has an interesting personal history in the game as a player and coach. The 56-year-old Californian had a six-year career as a switch-hitting shortstop with the New York Yankees in the 1980s. He accepted his first job as a coach as a 31-year-old in rookie ball in Eugene, Ore.

Meacham claimed he never really retired as a player. Instead, baseball retired him. When he got his foot in the door of coaching as an early-30s African-American, it was a time of optimism, a time when minority managers such as Cito Gaston, Felipe Alou, Don Baylor and Dusty Baker made it seem like doors were opening.

Meacham believed he could follow the path of those who blazed the trail to the majors, given his own managerial resume and passion for teaching. But 24 years later, he admitted he has never even had one interview for a major-league managerial gig. He has coached three stints in the majors, with Joe Girardi in Miami and with the Yankees, and in Houston with manager Brad Mills. Is he frustrated?

“The way I was raised — both my parents are teachers — and the way I feel about my abilities goes along with it,” Meacham said of his mixture or persistence and frustration. “I want to teach guys. This game is unbelievable. You learn something new every day, so I like to be a sponge and pick guys’ brains and learn. That’s fun, just being in the game and doing that anywhere. I love to impart that to the guys who are trying to grow and learn, no matter where that is, either.”

Meacham knows that this spring training, and every one he has attended as a coach in a major-league camp, is all about the big club. His needs and his roster are secondary to the big-league team being as competitive as possible.

“From my perspective, I know they’re going to send me the players they want to send me, so I’m not really concerned with those guys,” he said. “Just to get to know them, yes, but that’s not what I’m watching on the field.

“What I’m mainly watching for is what Gibby needs me to get them ready to do. I’m trying to communicate with him or (coach DeMarlo Hale) or whoever, to say, ‘Hey, if I get this guy, how do I prepare him for what you guys need?’ My goal is to just groom guys that are ready to go when they get to Toronto.”

Meacham has a long-ago personal history in Buffalo. He played for the Bisons in his final year as a player in 1989, signing a Triple-A contract with the Pirates at the end of that spring training. He enjoyed his season there.

“I played for Terry Collins, he was the manager,” Meacham said. “Big crowds every night, but I wasn’t the same player I was before. I got to help out and we had a pretty good team. Jay Bell was there, Jeff King. I got to help those guys out a little bit, hopefully helped them move up, even though I was done as a player.”

Meacham still has aspirations to manage in the big leagues, but he doesn’t see his failure to accomplish that in black and white. He refuses to pin it on colour.

“I wanted to manage in the big leagues, and I thought I had a good start at things,” Meacham said. “When I was with the Pirates, I got a chance to manage at Double-A and Triple-A pretty quickly.

“I was 34 when I managed at Triple-A, so I thought, man, this is going well. I thought I had a shot. The more I learned and learned, I thought I really have a shot. It hasn’t happened yet, but I’m still learning, still trying to help guys get better . . . Who knows? Hopefully I’ll get a chance.”

At least for 2017, he’s all in on trying to put a winning team on the field at Buffalo with whatever roster the Jays assign him.

“I think my biggest impact must be where I am,” Meacham explained. “In the meantime, obviously I have long-term goals like we all do, but that’s in the back of my mind. If that happens, great. If I get to manage at the big-league level, great. But if not, I just love learning and helping those around me learn.”