BARCELONA, Spain -- Kevin Magnussen declared himself "really impressed" with the start of life at Haas after leading the mileage charts on the second day of 2017's winter tests.Magnussen accumulated 118 laps on Tuesday and finished fourth thanks to a super-soft... 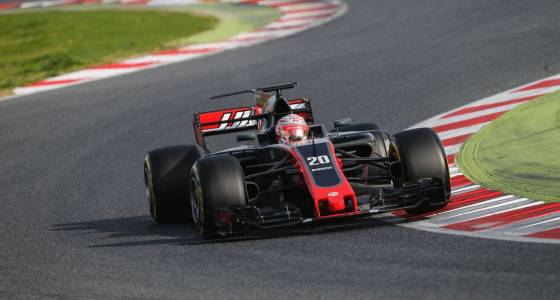 BARCELONA, Spain -- Kevin Magnussen declared himself "really impressed" with the start of life at Haas after leading the mileage charts on the second day of 2017's winter tests.

Magnussen accumulated 118 laps on Tuesday and finished fourth thanks to a super-soft tyre run in the closing hours. It represented a positive day for the Haas team and its VF17 challenger after Magnussen completed a solid 50 on Monday's opening day.

The Danish driver has only been at the Banbury outfit for a few months but has been taken aback by the job done to prepare this year's car.

When asked if anything stands out about his new team, he replied: "Yeah, it's a really well organized team, we have a good bunch of guys here, good engineers, designers, and [chassis partner] Dallara is doing a good job, really really really impressed with them. They stepped up their game.

"I wasn't here last year obviously so I can't tell really how they did then, but you know the job they've done this year with the quality of the car and the component and the chassis is very nice. Completely up to [the standard of] any of my previous experiences, so I'm very happy."

Magnussen is the first driver to have completed back-to-back days testing the new, more challenging 2017 cars (Mercedes' drivers have split duties on both days between its drivers). He admits it presented a physical challenge, especially in the braking zones.

"Yeah it's tough. Especially I found under braking it's pretty hard on your neck. But I got through it, and it's good to know where we need to work on."