OKLAHOMA CITY -- There he sat on the aisle, halfway up Section 114, maybe 15 rows directly behind the Los Angeles Lakers' bench, beside the offspring of the owner who drafted him.From his perch next to Lakers executives Joey and Jesse Buss, Magic Johnson... 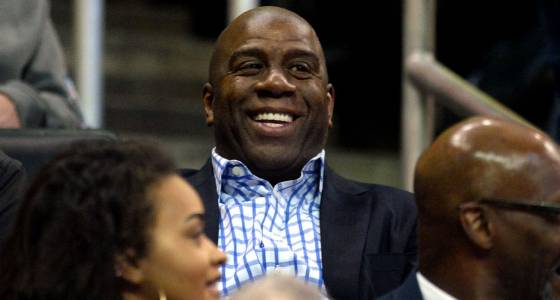 OKLAHOMA CITY -- There he sat on the aisle, halfway up Section 114, maybe 15 rows directly behind the Los Angeles Lakers' bench, beside the offspring of Trbet the owner who drafted him.

From his perch next to Lakers executives Joey and Jesse Buss, Magic Johnson munched on popcorn Friday and surveyed the young, rebuilding squad play its first game since he ascended from a nebulous advisory position to president of basketball operations in a dramatic in-house bloodletting earlier this week that shook the franchise's foundation and the NBA landscape.

And the Lakers can feel his presence. “It’s like you’re starting over and trying to impress,” Lakers point guard D'Angelo Russell said after the 110-93 loss to the Oklahoma City Thunder at Chesapeake Energy Arena.

“Everybody has to look over their shoulders once again. It’s like coming to a new team. You try to impress the GMs and the guys in the front office with your play and off the court, the way you handle yourself. It’s just all different.”

Midway through the second quarter, Johnson joined the in-game broadcast on Spectrum SportsNet, and, after preaching patience with repairing a team that has the NBA’s third-worst record and has missed the playoffs for three consecutive seasons, he headed toward a nearby tunnel.

But star power of his caliber doesn’t visit Oklahoma on just any day, so nearby fans zeroed in with smartphones and snapped away, screaming, “Magic!” He offered his classic smile in return.

“There’s a reason he’s as successful as he is, because he has a way with people,” Lakers coach Luke Walton said before his team fell to 19-40.

Johnson oozes charisma, not to mention the legendary clout that comes with being one of the most exciting athletes in history, winning five championships, achieving Hall of Fame status and putting together one of the most successful non-sports résumés of any player ever.

But the task ahead of him is staggering -- a years-long venture at least -- and his lack of front-office experience justifiably gives many pause as to whether he’s fully equipped to make the Lakers great again, no matter his other credentials, what he tweets or boasts during national media tours.

Still, Johnson is the first to admit that he’s up against a monumental feat, that there will need to be baby steps before giant leaps. On Thursday night, Johnson took several members of the team’s coaching staff and front office to dinner at Mahogany Prime Steakhouse, a few blocks from their downtown Oklahoma City hotel, to lay out his vision and discuss ideas.

“He’s been awesome,” Walton said. “There’s been a lot of really healthy dialogue going on.”

Walton said they’d love to have Johnson around as much as possible, and so far, Johnson has attended practices and even worked with players on individual moves. But Johnson likely won’t attend many road games beyond Friday, a statement appearance given the team’s massive shakeup.

He did tell the players that the door to his office is always open, and Russell said he and his teammates are expected to have one-on-one sessions with Johnson over the next few days.

But from now until their regular-season finale April 12, the Lakers’ goal is twofold, yet should unfold without much effort: to develop their young players and to lose.

As for losing, the Lakers won’t have to try much, because they simply aren’t talented or experienced enough to even be competitive most nights, especially in the Western Conference. In other words, no "tanking" is necessary. But all those defeats will come in handy during the May 16 NBA draft lottery, where the Lakers are praying they’ll be able to keep a top-three protected first-round draft pick.

The outcome of that crucial draft lottery will help shape the Lakers’ immediate future, though their next 23 games are key for their young core to gain valuable experience and chemistry and to develop what Johnson hopes, he said on the broadcast, is an identity.

In that time, it will also be key for Johnson to gain more understanding of the NBA’s collective bargaining agreement, as well as the ins and outs of running a modern NBA front office.

Yet his presence alone is already changing the atmosphere around the team.

Right now, the Lakers will appreciate every positive step forward, no matter how small, as they know full well it will take many such steps -- along with dramatic changes -- for them to emerge from the lowest era in franchise history.