For the first time since he assumed his new role with his former team, Los Angeles Lakers president of basketball operations Magic Johnson addressed fans at Staples Center on Monday night at the 13th annual Lakers All-Access event, hosted by the Los Angeles... 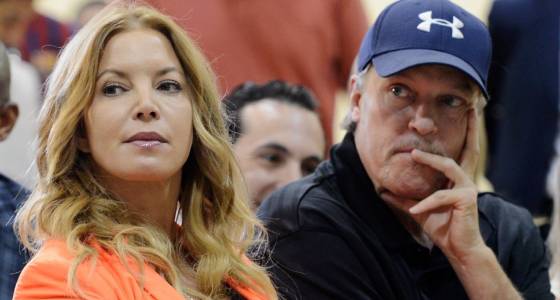 For the first time since he assumed his new role with his former team, Los Angeles Lakers president of basketball operations Magic Johnson addressed fans at Staples Center on Monday night at the 13th annual Lakers All-Access event, hosted by the Los Angeles Sports & Entertainment Commission.

Johnson spoke about an array of topics, including what it was like contacting Indiana Pacers general manager Larry Bird this past week.

"It was funny because the first thing he said to me, 'Are you crazy? Why are you getting into this?'" Johnson said, in part.

What follows are some highlights from their comments:

Buss on the recent front-office overhaul: "It’s hard to put your finger on, and it’s certainly not the Laker basketball I’ve lived with and the years that Dr. [Jerry] Buss ran the Lakers, they only missed the playoffs twice in over 30 years, and that’s a remarkable feat. And to imagine not making the playoffs again for the fourth consecutive year is not the Laker basketball that I grew up wanting and it’s not the product that we want to deliver to the fans. So I think that we needed that kind of vision, and not only the way [Johnson] sees the basketball court and what goes on there, but also what the Lakers mean to the community and with how he governs that -- the fans are the best fans in the NBA, and we need to engage them and make them excited and hopeful, and that’s why we made the change."

Buss on why she didn’t make the decision sooner: "It was probably the most difficult decision I’ve ever had to make. Certainly, I am a person who wants continuity, and change is difficult for anybody, but I agonized over it, thought about it and I think that’s what took so long to make the decision, is that it was so difficult. And I apologize to Lakers fans for taking that time. But it was something that had to be made in a very thoughtful way. 'Well,' some people would say -- 'the timing is unusual because it was a couple days before the trade deadline.' My thought was that, there really is no offseason in the NBA anymore, that you are constantly trying to plan for what’s coming up. So you have the trade deadline then you have the draft lottery, then you have the draft, then you have summer league -- it’s always something. So there really is never a right time to make a change like that. But once I knew in my heart that it was the right decision, then there was really no time like the present. And to have an opportunity to sign and wrap up somebody like Magic Johnson, whose schedule is always busy, and if you don’t seize an opportunity, then it might have disappeared. It was important to me once that decision was made to execute it and move decisively."

Buss on Johnson: "I think that when you think about an icon, somebody who like Muhammad Ali is an inspiration not only to his community but to the world. There are only a few names that really resonate, and Magic Johnson is one of those names."

Buss on Luke Walton: "When he was a player with the Lakers, there was a time period when he was injured and Phil Jackson, who I’m still close to, saw something in Luke that he saw in himself, and he began mentoring him because he knew someday we would need a great coach. Tonight, on my credential, I’ve got a nice picture of Luke with his smile and I told him, 'The force is with us. We’ve got Luke in the house.' I don’t think he even understands the natural charisma he has and the leadership qualities. He’s one of the very great people that can really connect with people on a level that is inspiring and inclusive. He’s got all the qualities that you need in a coach."

Buss on who she looks up to, other than her father: "I would say Robert Kraft, who owns the New England Patriots. He and my father were really good friends, because they both started in sports in the same way. They both owned World Team Tennis teams. My dad owned the Los Angeles Strings and Robert Kraft owned the Boston Lobsters ... Every year, on my father’s birthday, Robert Kraft would send my dad a bunch of lobsters. They stayed close their entire lives."

Buss on sports medicine: "There’s so much going on in sports medicine, and you have to be on the cutting edge -- not only to maximize the level of performance of an athlete but also to keep them healthy, and if they’re not healthy to get them back sooner. Because if you can take a star player and add one or two or three years to their career, you’re really maximizing what they can contribute, because there’s always a learning curve. And we’re watching this in real time with this young team that we’re watching them develop and grow and learn. In the NBA, playing time is the currency that we use, and when you take that currency of playing time and invest it in young players, that will pay dividends as you go on."

Buss on the latest NBA collective bargaining agreement: "There's 30 teams in the NBA, and I really, truly believe that the current CBA and the way the league is set up is that any team at any time can win a championship, and that’s what you really want as a commissioner. You want everybody to have that opportunity. But I think even with an even playing field, there’s something about playing for Lakers fans, Laker nation -- no CBA can make that equal. We have the greatest fans, and they can’t take those away from us with the CBA. As long as they continue to do that, I think the Lakers will have an edge. Pulling from all our strengths and all our assets, which includes former players like Magic Johnson, like Kobe Bryant -- those are our strengths."

Walton on growing up a Celtics fan: "I was a die-hard Celtics fan. I had the poster of Magic and Larry standing back to back with the Converse on in my room. At our house, we weren’t allowed to call them the Lakers. We had to call them the Fakers. We weren’t allowed to say that word around Celtics players. But as soon as I got drafted to L.A. and I was sitting in the living room with my dad on draft night and they called me, we both instantly turned into Lakers. The older you get, you really get an appreciation for how amazing that Showtime team was, and the Celtics team, really. Those were two of the two greatest teams ever assembled, and it happened to be in an era when they battled East Coast vs. West Coast year after year. Such a special opportunity for someone who loves basketball as much as I do to grow up in an environment like that."

Luke Walton on the best/worst traits he inherited from his father: "The best is work ethic and finding what you’re passionate about in life. He was incredible as a basketball guy and a dad. A lot of people would assume he pushed it on us as kids, but he was so supportive to me and my three brothers about finding what you're passionate about in life, whether that’s basketball or music or whatever it is -- follow your dreams with that. The fact that he supported each of us to do what we loved doing and then taught us that hard work is the only way to get there is what I really valued, and he passed down to us. And then the bad I got from him was his body. My ankles and my back and my knees hurt every day."

Johnson on what it was like being involved with trade talks with his old rival, Pacers GM Bird: "We only talked for about two or three minutes about the possibility of a trade, but it was more geared toward later on, not at that moment. It was just saying "Hi, I’m here and we’re looking forward to talking to you later on this summer."

Johnson on today’s NBA game vs. when he played: "First of all, when I played, it was inside-out, so you pound the ball inside to probably the most dominant player we’ve ever seen in Kareem Abdul-Jabbar, and then we pounded it to James Worthy, one of the greatest small forwards that’s ever played. And then if [those] two were busy or didn’t want to shoot, then I would go into the post and do my thing. So it was definitely driven by banging the ball down inside. Now, it’s the 3-point line. All the emphasis, even on the fast break -- we’re seeing a lot of teams that would much rather shoot the three than shoot the two. What we’re trying to do, because it’s not just me, I want to make sure that Luke is involved because he has to coach these guys and also what type of offense he’s going to run, those guys have to fit into that offense. What we’re trying to do is make sure that guys want to win. They love to compete and they’re going to love being a Laker. We want guys who want to play for the Lakers, want to play in this town, understand what it means to play for the Laker organization."

Johnson on working with Walton: "It’s been easy. It’s been really easy. This man is the coach of the Lakers. I’m not the coach. He’s the coach. I sit back. I just watch the game, I watch practice. His job is to coach. I may come to him and say, 'So and so may need to work on this.' Like I’ve done a couple times. But that’s up to him after that ... But I would never interfere with him and the players that he’s coaching."

Luke Walton on working with Johnson: "What you’ve got to remember is I played with Kobe for eight and a half years." [Luke noted that he hasn’t been "yelled" at once since Johnson came aboard.]