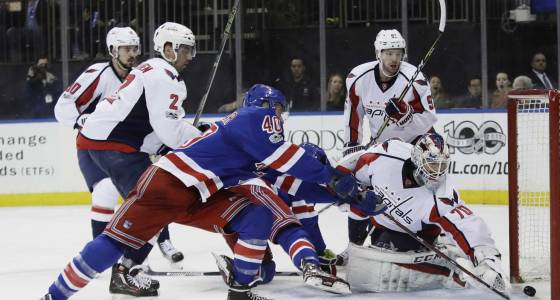 Marcus Johansson had two goals and an assist to ankara escort help Washington beat the New York Rangers 4-1 on Tuesday night in Kevin Shattenkirk's first game with the Capitals.

Shattenkirk, acquired from St. Louis on Monday night, had four shots on goal in 17:57 of ice time.

Brady Skjei scored in the first period and Henrik Lundqvist finished with 34 saves as the Rangers lost for the second time in three days on home ice after going 5-0-1 in their previous six at Madison Square Garden.

Predators 5, Sabres 4 (OT): Filip Forsberg scored two goals, including the game winner 2:45 into overtime, and Nashville beat Buffalo for its fourth straight win. Kyle Okposo, Brian Gionta and Jake McCabe each had a goal and an assist for the Sabres. Evander Kane also scored and Robin Lehner made 36 saves for Buffalo, which has lost four in a row.

Bruins 4, Coyotes 1: Riley Nash scored a short-handed goal after Colin Miller was ejected for a bone-rattling hit that sent Arizona's Alexander Burmistrov to the hospital, and Boston pulled away with a three-goal second period. Tuukka Rask stopped 22 shots for the Bruins. Mike Smith stopped just 10 of Boston's 14 shots in the first two periods. He was replaced at the start of the third by Louis Domingue, who had 11 saves.

Wild 6, Jets 5: Jason Zucker scored a short-handed goal with 2:10 left. The Jets' Joel Armia and Mark Scheifele scored in the third period to erase a two-goal deficit before Zucker's winner

Notes: The Sabres acquired defenseman Mat Bodie from the Rangers in exchange for forward Daniel Catenacci in a trade of minor-league players. Bodie, the captain of Union College's NCAA championship team in 2014, had signed with New York after that season. Bodie has spent the past three seasons playing for the Rangers' American Hockey League affiliate in Hartford. He ranks 12th among AHL defensemen with 30 points (eight goals, 22 assists) in 45 games this season. Overall, Bodie has 20 goals and 78 assists in 196 AHL games. Catenacci was Buffalo's third-round pick in the 2011 draft. He has no points in 11 NHL games, and 43 goals and 46 assists in 246 AHL games. ... The Detroit Red Wings have traded defenseman Brendan Smith to the Rangers for second- and third-round picks. Detroit gets a second-round pick in 2018 from the Rangers, who acquired the selection from Ottawa, and a third-round pick this year.